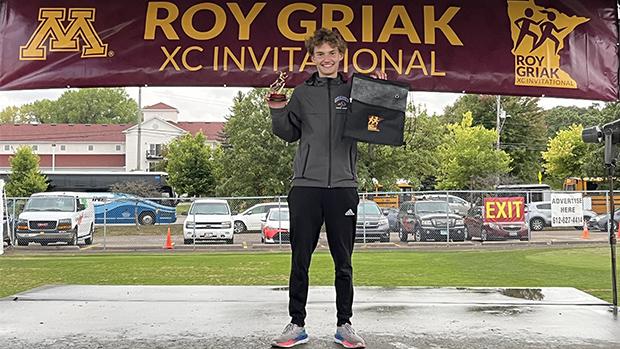 The Roy Griak was the big meet of the week last week, but there were plenty of other elite meets and intriguing performances all around Minnesota last week. Plenty enough for us to find our 5 boys nominees for Minnesota male runner of the week.

So without further ado, here are this week's nominees for the Minnesota male cross country runner of the week for September 18-24.

Noah Breker won his fourth straight meet of the season in a narrow victory at the competative Roy Griak Invitational. Breker ran a time of 15:31.10 to win the meet by about 2 seconds over Jackson Heidesch. In doing so, he ran the 2nd fastest time in meet history, just 0.30 seconds behind Obsa Ali.

Owen Layton won his second meet of the season at the Rocori Invitational where he set a new personal best time of 15:45.60, his first time running under 16:00 for the 5K. Layton has now led the Big Lake boys to four straight team wins on the season for an undefeated fall. Layton owns the 5th fastest time in Class AA this season.

Nolan Sutter looked dominant in his performance at the Roy Griak en route to winning the boys Maroon race with a time of 16:20.70 in some tough conditions. This is Sutter's third meet win of the season at all distances.

Logan Drevlow finished 68th overall in the boys Gold race at Roy Griak, but in doing so he was the top middle-school runner in the field among 50+ teams. Drevlow finished with a time of 17:00.20.

Kelton Koepp turned in a massive performance at the Winona Jim Flim Invitational where he finished 4th overall with a time of 16:30.60, a 33-second PR. Koepp has been a strong performer on a Belle Plaine team that is one of the best in Class AA.

Who was the MileSplit Minnesota Male Runner of the Week? (Sept. 18-24)