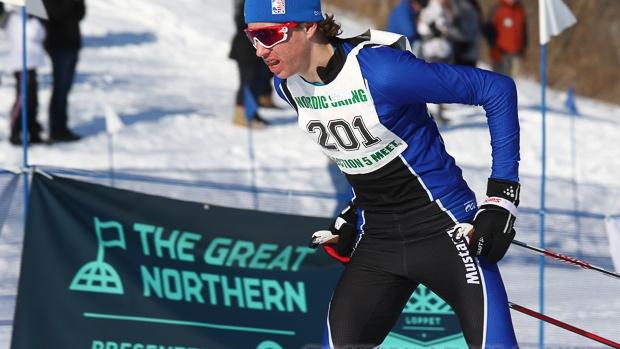 For many Minnesota runners, once the fall cross country season ends the winter Nordic skiing season begins. Nordic offers an excellent form of non-impact cross training over the winter.

This past week, Nordic section meets took place across Minnesota. In each section, the top two teams and the top six individuals not on those teams qualify for the state meet, held February 15 at Giants Ridge.

This week we highlights some of the high school athletes who will compete at this big-time Nordic skiing championship.

Olson finished his cross country season just outside the top 25 at the state meet. He is currently on the cusp in the Nordic rankings, and has had a strong season up to this point. He finished second in section 5, and has an excellent shot at a potential top-ten in the Nordic State Meet after finishing 31st last year.

Bourne competed in his second cross country state meet this past fall. However, he enters his element on skis. Strong results in the junior national qualifier races, as well as a runner-up finish in the stacked section 4 have set him up well for the State Meet. Last year, Bourne was the 'largest mover', passing an astounding 41 skiers to move from 74th to 33rd place. He is ranked 'on the cusp', and will be challenging for a top-ten spot at State this coming Thursday.

Nemeth finished 29th in the class AA race this past fall, and he has made incredible strides in his skiing this year. He is in prime position to qualify to represent the Midwest region at Junior Nationals, and is currently ranked third in the state. He is coming off a dominant win in section 8, and will look to push for the individual title in only his junior year.

Lennox led Mora with an impressive eighth place finish in the class A State cross-country championship. Ranked 8th in the State for Nordic, Lennox will look to build off an impressive 50th place finish as a freshman last year. He won the section 5 championship over Blaine's Ben Olson, and will look to follow in the footsteps of Mora alums Mick and John Schwinghamer with a strong performance on Thursday.

Sonnesyn was a vital cog in the 11th placing Wayzata cross-country team at Nike Nationals. He placed 19th at the class AA State cross-country meet, and has been one of Minnesota's top skiers for a few years now. He is ranked first in the state for Nordic, and justified that with a convincing win in section 6 over his top competitor, teammate Luc Golin. Sonnesyn has been fairly untouchable recently, and is the favorite to take the individual title on Thursday. He also will lead the Wayzata boys to a likely team title, as three of their top four scorers are ranked in the top-5 in the state!

Duffy finished 57th at the class AA cross country state meet this past fall. She has risen to the top of a very impressive, fourth ranked, Forest Lake team. Duffy herself is ranked third, and is coming off of a win in section 4 over Stillwater's Libby Tuttle. She will be in an incredibly deep field of girls gunning for a medal on Thursday.

Brewster had a stellar cross country state meet this year, finishing fifth in the girls class AA race in Minnesota. She carried her impressive form into the postseason, placing 10th in the championship race at Nike Cross Regionals Heartland. For Nordic, Brewster finished second in section one and is looking to improve on her 42nd place finish last year at State. Only a sophomore, Brewster has a bright future ahead, both in Nordic and cross-country!

Nightingale is one of the brightest young talents in Minnesota. She qualified for her second state meet this past week in her second season of varsity eligibility! Nightingale was the fifth individual qualifier out of section four, and is the youngest individual qualifier in the state. Her first state Nordic meet will give her some valuable experience to use in the many to follow.

The future Brown Bear had a stellar cross country season, helping the team from Edina to a Nike Cross Nationals team qualification and a runner-up team finish at state. Kompelien herself placed fourth at the state championships in cross country and 39th at NXN. Kompelien skied to a strong fourth place finish in section 2. She placed 53rd at the Nordic state meet in 2017, and is leading 8th ranked Edina into this year's meet.

Best of luck to all those competing at the state Nordic meet!