With the cancellation of the Swain Meet for good, we at MileSplit Minnesota wanted to check in with some of the past champions of the race to see what their Swain Meet wins meant to them and their favorite Swain Meet race memories.

Run Since 1951, The Swain Invitational Comes To An End

The meet began in 1951 and was named for former Duluth Central cross country coach John Swain. Central hosted the event for many years before the school closed in 2011, Duluth East cross country coach Dave Wicker said. At one point, the Swain Invitational was one of the two or three biggest meets in the state, but the number of schools attending began to fall because of budget cuts and travel restrictions, particularly for Twin Cities schools.

Let's check in with some former champions and Minnesota running legends:

"I absolutely loved the Swain Invite. It was on a hard course and it was the one time the teams from the cities had to drive up to us in Duluth! I was so proud to win 4 times, especially that final time as I was struggling a bit with my running at that point in my career. I remember getting to the meet early and watching all the races as it built up to the AA variety girls race. I would be so excited and nervous! I had a great team and we always raced well together there. We loved that race, loved racing on our home turf. It was a big meet and a great chance to practice race nerves! I will miss reading about the Swain, it had a lot of history and pride for us Duluth teams!" 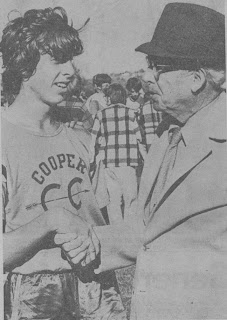 "I remember it as the biggest, most meaningful invitational in the state for high schoolers of that vintage.  At a time we weren't traveling outside Minnesota for high school meets. I also recall that based on my second win at Swain my picture and a short couple sentences about my wins at Swain made the "Faces in the Crowd" section in Sports Illustrated.  The cover that week featured OJ Simpson and his exploits as a Buffalo Bill."

"I loved the atmosphere of the meet. It had a different feel to it. My team would get on the bus super early and drive up to Duluth. It almost felt like a vacation. A vacation with a smidge of hard work racing. I love the course! It's challenging and rewarding once you cross the finish line because you go through every emotion. It's one of the best meets in Minnesota" "Running at Swain was always a race that I looked forward to every year! Now that the race has come to an end it makes the meaning behind going and the memories made with my team so much more special. I feel honored to be able to have run on the course with so many amazing teams and competitors from all over the state of Minnesota. To say that my team and I were able to win and add a piece of history is something that we will hold onto forever! One of my favorite memories from the meet was being able to run in Duluth but also running on a course you didn't ever really get to see. The staff and meet officials always did an amazing job managing the course and making it so memorable."