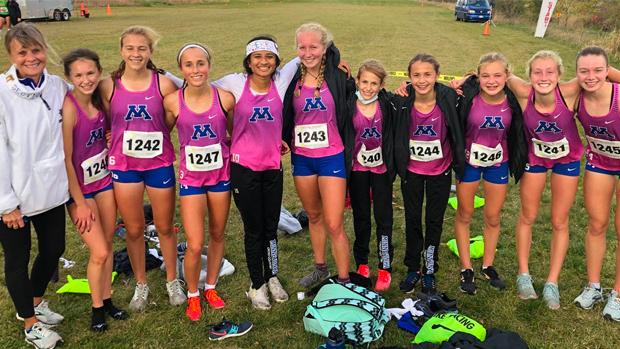 When the voting concluded for the week three Minnesota Boys and Girls Runner of the Week, Noah Breker and the Minnetonka girl's came out on top in some competitive polls!

Each week will there are four boys and four girls for each poll. Participants are based on the MileSplit Minnesota staff's opinions. The rest is up to you!

We caught up with Breker and Kate LeBlanc of Minnetonka to talk about their season, and see how it felt to be voted the Minnesota boys and girl runner of the week! Honestly, I was surprised to see myself in the poll. The recognition is pretty cool, but it just gives you all the more reason to keep it up and not fall behind.

How have you been able to make such steady improvements over the course of your career?

This summer I had some solid training, not as much as I had hoped for but I still got out as much as I could. I've been hitting all my times in workouts and making sure I'm keeping up with supplemental workouts and injury prevention. Goal setting is also a big part of my past improvements, I had the goal back in 9th grade to win Milaca and I made it happen as well as making state. It gives me the drive to work harder when I can set my mind towards something.

How did it feel to win the Milaca Mega Meet for a second time?

This year I knew I was still in the game for 1st, so I went out hard and made sure I put in the gap. Finishing the race was amazing as well as beating our school record, which was a huge goal of mine.

Moving forward, I want to continue to drop more time, climb the rankings, and stay healthy. Obviously, I'm gunning for #1 at state, which definitely won't be an easy task, but I'll do whatever it takes to get there.

What does your team hope to accomplish this season?

Team-wise, we're kinda in a rebuilding year with Alex Omodt and I leading the way. Nothing outstanding this year but we hope to place top 3 at conference. How does it feel for your team to win Minnesota GIrls Runner of the Week?

It is quite an honor for our team to win Minnesota Girls Runner of the Week! In a state filled with talented runners and a field of amazing cross country teams, there is a lot of competition and being one of the top teams is really exciting for us.

What do you think have been important factors in your team's success so far this season?

I think we have had lots of small successes that have led up to larger successes for us as a team. Our girls have been performing extremely well and we are really good at supporting one another through these achievements. As a team, we are undefeated which is our greatest success thus far.

How do you all keep each other motivated to continue competing so well as a team?

This is going to sound cliche but we stay motivated by keeping a very positive attitude. We are really good at focusing when we need to and working together to get stronger and faster. Coach Jane also always knows what to say to us to get us fired up and ready to compete. We have a really tight-knit group which gives us an advantage because we know each other so well. Outside of running, we are all best friends, which really says something considering our 8th-12th grade age gap, and speaks to how well we know one another.

Moving forward, what are your team's goals for the rest of the season?

Our immediate goal as a team is to compete with a couple of our greatest competitors at conference and sections. After getting through sections, we are looking forward to racing at St. Olaf against the best runners and teams in the state. We are expecting some great things coming from our team at the state level and are looking for a podium finish.

As a senior, what has been a highlight of your career as a Minnetonka Skipper?

One of my personal highlights through my career as a skipper has been the overall relationships I have made over the years. As I mentioned before, I absolutely love my team and the memories we have made. I also could not be more grateful for Coach Jane. I've run for her since 7th grade and she has had such a strong impact on me and countless other athletes.