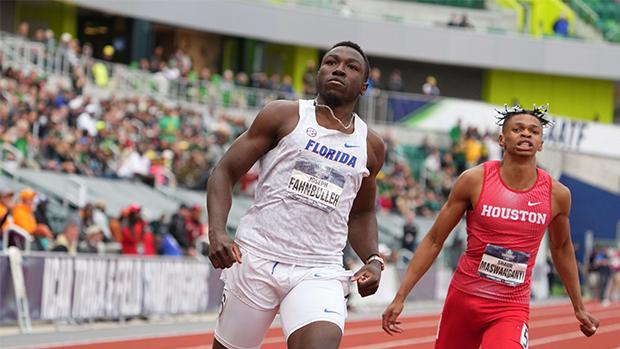 The best of the best will compete at the 2022 NCAA Outdoor Track and Field Championships, and our Minnesota high school alumni will be well represented by 14 athletes who compete collegiately all across the country.

Our Minnesota athletes come from all sorts of backgrounds from Championship staple Bethany Hasz, D3 transfer Matthew Wilkinson, true freshmen Nyalaam Jok, and Olympian Joseph Fahnbulleh. What they all have in common though is their Minnesota ties, and their championship-level talent.

Let's see who will represent their school and Minnesota at the 2022 NCAA Outdoor Track and Field Championships!

What more can we say about Fahnbulleh. He qualified in three events, including being the top qualifier in 200m. He is ranked as the #4 qualifier in the 100m with a time of 10.04 and anchors the Flordia 4x100m relay team, who qualified as the #7 team.

Iverson qualified for his first NCAA D1 Track and Field Championships in both the 5k and 10k with matching 4th place finishes in both events at the NCAA East Prelims. Iverson ranks 20th in the 5K field and 4th in the 10k, though his qualifying times are both off of his personal best times.

Matt Wilkinson just provided the moment of the meet. NO QUESTION.

The Gopher's fantastic steeplechase duo of Wilkinson and Basten will look to bring home some hardware as two of the top qualifiers in the event. The pair both earned automatic qualifying spots in the event with Wilkinson winning the same heat that Basten finished third in. Wilkinson's time of 8:32.61 was good enough for the top time of the three heats, was a personal best, and places him at No. 3 in program history in the event. Basten's time of 8:33.91 was the third-best time overall at the meet and is a season-best time for the former NCAA runner-up in the steeplechase.

Siekmeier earned the final spot in the men's discus event, finishing 12th overall. With just three attempts to work with Siekmeier tossed a mark of 54.90m (180-1) to secure his second career trip to the NCAA Outdoor Championships in the discus. In 2021 Siekmeier finished 18th and was an honorable mention All-American.

Finley will make her fifth appearance at nationals in her career, but for the first time will be entered into an individual event outdoors. Qualifying in the women's 800 meters, Finley ran her way to a new school record with a time of 2:03.87. Finley's time breaks the school record of 2:04.43 set by Whitney Adams in 2016, as Finley qualifies for the NCAA Championships for the first time in the 800 meters. Finley ranks as the 19th overall qualifier in the 800m.

In the 4x400m relay, Finley will represent Kansas for the third time at nationals in the event, and for the first time since 2019. The Kansas team is the 15th ranked qualifier in the event this year.

Frye and Hansen, alongside Akilah Lewis and Amira Young, will look for some upsets to make it into the 4x100m relays after qualifying as the 23rd out of 24 qualifiers in the women's 41x100m relay. Qualified with a time of 44.37 which is the third-fastest time in school history. The time was good enough for an 11th-place finish at regionals and makes the team the first 4x100m relay team to make the national meet since 2012.

NOT DONE YET! :clap:

Queen B is headed to Eugene! She takes 8th overall and earns and auto bid in the 5K!! #ncaaTF pic.twitter.com/O6aUXNJXse

One of the most successful Gophers ever, Hasz extended her career one more race with a fifth-place finish in her heat to automatically qualify. The trip to the national meet is Hasz's seventh overall (including cross country) and is the third time she'll run the 5000m at the outdoor championships. Hasz qualified with a time of 16:07.66 which puts her 20th in the field. She holds a lifetime best of 15:30.57 from last spring when she placed 3rd in the 5K at the D1 Outdoor Championships.

TRUE FRESHMAN TO THE SHOW!

It was another solid day for @HokiesTFXC :punch:

Fixsen will go to nationals for the third time overall in the pole vault, and for the first time outdoors. This will be Fixsen's 2nd straight nationals this spring, after finishing 3rd overall at indoor nationals. Fixsen qualified tied as the top qualifiers alongside 11 other girls at 4.31 meters (14' 1.75").

Keefer qualified for her fourth overall nationals as a redshirt senior. In the women's long jump, Keefer placed ninth in a field of 48 at regionals with a distance of 20-4.5. The spot was enough to earn her a ticket to Eugene, with the top 12 finishers advancing.