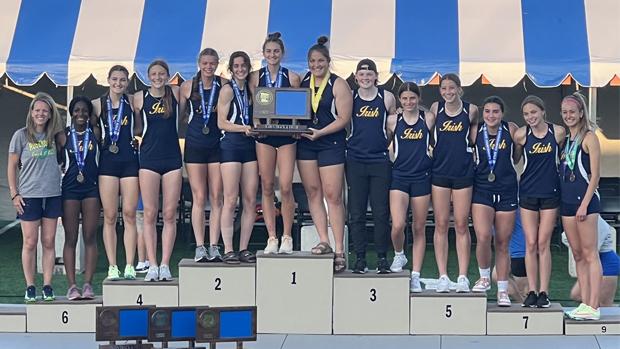 The 2022 MSHSL State Track and Field Championships returned to St. Michael-Albertville today with the start of this year's state meet. On day 3 we had the Class AA and Class AAA finals for the final day of competition.

Day 2 of the State Track and Field Championships was filled with some all-time great performances, returning state champions, and many memorable moments. Let's look at what day 3 had in store for us.

So without further ado, here are the top performances from Day 3 of the 2022 MSHSL State Track and Field Championships.

Ava Fitzgerald made state history at the State Meet when she ran a 13.81100m hurdles race to shatter Karina Joiner's state record of 13.94 which was set in 2016. Fitzgerald is now only the 2nd Minnesota girl ever to run below 14 seconds in the 100m hurdles.

Ava came into the meet with a strong personal best of 14.14 in the event, but no one would've thought she would've PR'd by over .30 seconds to take all the state records in the event (state record, meet record, etc.). She now owns the 17th fastest mark nationally in 2022.

Ramy Ayoub State Champion 400m dash with a new state meet record and FHS School Record. That one will stick around for a long time! pic.twitter.com/oHv0aUPUfa

Farmington's Ramy Ayoub put the final exclamation point on his historic track and field career by running a 47.34 400m dash that ranks 2nd all-time by a Minnesota boy. His time puts him only behind Mounds Views Quinn Evans who ran a 47.18 in 2007. Ayoubs time was a 0.21 second personal best. He beat out runner-up Dwyne Smith Jr. by a second.

This was amazingly Ramy's first state title after finishing second in the 400m at last year's state meet. He graduates having run some of the fastest 200m, 400m, and 800m times in Minnesota state history.

Julia Gherardi has now won back-to-back pole vault state titles, but more impressive is how she did it this time. Gherardi vaulted 13' 0" for a 5-inch PR and a 9-inch season-best time (in competition). All the more impressive is that she is now just the fifth Minnesota girl all-time to vault 13 feet or higher. That elite company including Gherardi includes Julia Fixsen, Andi Jacobs, Stacie Manuel, and Alicia Rue.

This gives her the best mark in the state this season and the best vault since Julia Fixsens state record in 2018. Her mark of 13 feet ties her for 39th nationally among all girls this season.

The St. Peter boys came away with the Class AA state title beating out runner-up Spectrum by four points. St. Peters 44 points were scored across 5 different events, mostly by different athletes. Kole Guth and Brogan Hanson were the only St. Peter boys to compete in two events. Guth scored 16 points via the 4x200m and pole vault. Hanson scored 20 points in the 4x200m and 100m dash.

The Monticello girls brought an impressive amount of athletes to the state meet to compete in 11 events. They came away with 71 points to beat out Providence Academy with 60 points. The top point scorer for Monticello was Thalia Mendoza-Brunotte who competed in the long jump, 200m, 400m, and 4x200m relay, scoring 33 points overall.

Zoie Dundon with a dominant run!

She takes the State Championship in the 800-Meter with a time of 2:09.51 for @BurnsvilleTF!

Dundon had already and still ranks fourth all-time in the 800m among Minnesota girls all-time, but now she can say she is just one of four Minnesota girls to break the 2:10 barrier. The other girls to have done it are Ruby Stauber, Jeanne Kruckeberg, and Kaytlyn Larson. Her time of 2:09.51 ranks her 49th nationally among all girls in 2022.

194' 6" had been the State Meet mark to beat for a while and seemed like one that would hold up for a while...well it only ended up being 5 years. The old mark, held by Jake Kubiatowicz, was shattered by Rosemount's Hayden Bills when he uncorked a throw of 196' 2" to beat the old State Meet record.

Bills had previously owned a personal-best mark of 183' 0", but shattered his personal best, the state meet record, and the Rosemount high school, school record all at once. His mark of 196' 2" is now the fourth-best discus throw of all-time by a Minnesota boy.

The Andover boys, behind the efforts of Blake Nyenati won the Class AAA boys state title over runner-up Rosemount by a score of 62.2 to 58. They were anchored by Blake Nyenati who won the 110m hurdles, the 300m hurdles and ran as the opening leg of their third-place 4x200m relay.

The Rosemount girls won the Class AAA state title by 12 points over Minnetonka. They were led by senior Ava Cinnamo who scored 44 points individually in the 100m hurdles, 300m hurdles, and in the triple jump. She scored 44 of Rosemount's 93 points.

Maple Grove's Jordyn Borsch set the state meet ablaze by winning the 100m dash, the 400m dash, and by finishing third in the 200m. Borsch PR'd in all three events and all three PRs make her one of the fastest girls in state history.