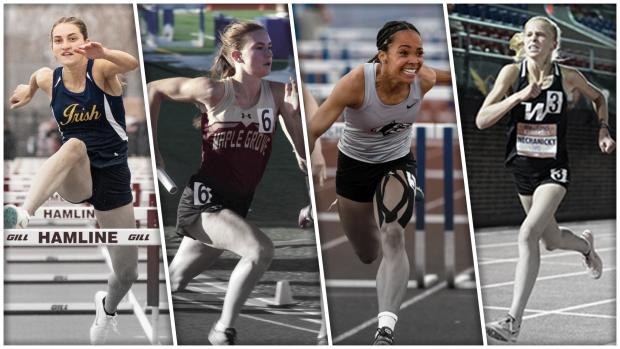 As usual, the Minnesota girls had a historic season with many top ten all-time marks, state records, state meet records, and more!

Here we look at the 2022 candidates for the Minnesota girls track and field athlete of the year! If you want to vote, scroll below past the athlete bios to vote!

Abbey Nechanicky had a very impressive spring after coming off an injury for the cross country season. She ran PRs in the 1600m, 3200m, and 2-mile races. Won the Class AAA state title in the 3200m and finished 3rd in the 1600m. Her season finished at New Balance Nationals with a 3rd place finish in the 2-mile with a time of 10:10.07 which ranks her #2 all-time in Minnesota.

Ava Cinnamo had a record-breaking season which culminated in a state record in the triple jump, two Class AAA state titles, and a 3rd place triple jump finish at NSAF Nationals. Led the state in both the long jump and triple jump marks, and competed in four events at nationals.

Ava Fitzgerald finished her season strong with a 100m hurdles title at the Class AAA state meet. Her time there of 13.81 shattered the previous state record set by Karina Joiner (13.94).

Zoie Dundon ran a perfect season in the 800m going undefeated in 9 races and running some historic times in the process. Dundon finished her season with the Class AAA state title with a time of 2:09.51 that ranks her #3 all-time among Minnesota girls.

Shaina Zinter finished her season on a high note as she became a national champion in the heptathlon at NSAF Nationals. Also won three Class A state titles in the 200m dash, 100m hurdles, and 300m hurdles. Finished off her high school heptathlon career strong with a 2:10.47 800m dash at NSAF Nationals that ranks 9th all-time in Minnesota.

Julia Gherardi made history at the state meet, becoming the 5th girl in Minnesota state history to jump 13 feet or higher in the pole vault. She has now won back-to-back state titles in the pole vault out of Class AA.

Open until 7/28 at 7 pm CST
Tweets by MNTrackXC