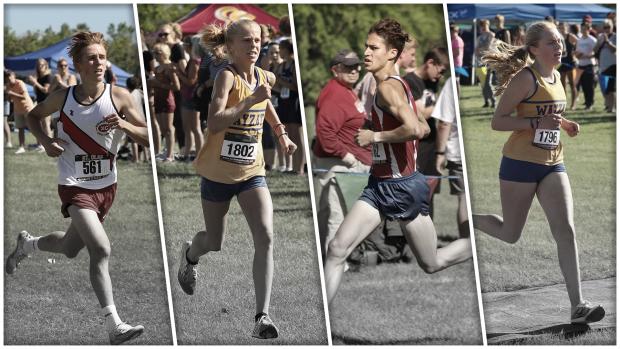 The St. Oalf High School Showcase was back and better than ever with fierce team and individual battles between some of the best Minnesota has to offer. It was a blistering hot day for the meet, which is normal for some early season meets, but that didn't stop from a new meet record time and another near meet record time in a historic race.

Check out how the races ended with our boy's and girls recaps below!

In an upset win and major breakthrough for a team with state title ambitions, the Lakeville North boys came away with the St. Olaf HS Showcase title after top-twenty finishes from Andrew Casey, Bryce Stachewicz, and Ethan Kimmel. They beat out runner-ups Minneapolis Washburn by 33 points (95-127).

In the boy's open race, it was the Wayzata boys coming away with the win with 29 points over the Lakeville North boys. The individual winner was Minnehaha Academy's Kristian Kosterac with a time of 18:58.70.

In the boys individual race, it was a great group vying for the title with Noah Breker beating out a tight group of runners that also included Nick Gilles, Sam Scott, Aidan Jones, and Andrew Casey. Breker beat them all to the finish line with a time of 15:26.10 that beat out Scott's meet record from last year by 9 seconds.

If all the top 5 boys above and some of the other top tier talent in the state can run like they did today, it will be a memorable season, and who knows who will come out on top.

The Wayzata girls runners came into the race projected to be the top team in the state of Minnesota and they came out of the race with a statement win as a team and a huge statement win for Abbey Nechanicky.

The Wayzata girls came into the meet with a narrow lead in the MileSplit50 rankings over rival Minnetonka but came out of the meet with a decisive 48-point win (64 - 112). The Wayzata girls brought their full complement of varsity girls while Minnetonka was absent Maya Mor and Abby Downin. Nonetheless, this was a huge win to start off the season for Wayzata, and every other girl's Class AAA team will be chasing them all season long.

The #1 Class A ranked Staples-Motley girls finished 3rd place and showed that they're a team to be reckoned with this fall as they decisively beat out Class A rival and #2 ranked Perham. They also beat out four Class AAA ranked teams in Mounds View, Farmington, STMA, and Hopkins. Led by Aften Robinson, Audrey Brownell, and Kyanna Burton they seem to be a force to be reckoned with in Class A.

In the girl's open race, the Wayzata girls had a near-perfect score of 19 points. Only Waseca's Stella Omtvedt prevented that from happening. The individual champ was Wayzata's Maddie James with a time of 21:38.

In the girl's individual race, it was all Abbey Nechanicky for her 2nd St. Olaf HS Showcase win. Nechanicky coming back healthy this fall after missing almost all of last season came out strong in her season debut to the tune of a new 5K PR of 17:08.9. She beat out runner-up Sydney Drevlow by over a minute in one of the strongest season debut races we've ever seen in Minnesota.

This was only the 3rd ever sub-17:10 performance by a Minnesota girl in either August or September all-time. The only other performances to meet those standards were Covert's time mentioned above and Tierney Wolfgram's 17:06.80 from the 2018 Milaca Mega Meet.

Other notable performances include Waconia's Madeline Lage breaking the 19:00 barrier for the first time en route to a 3rd-place finish, and top-ten finishes for 8th graders Abigail Tri and Linnia Ousdigian.