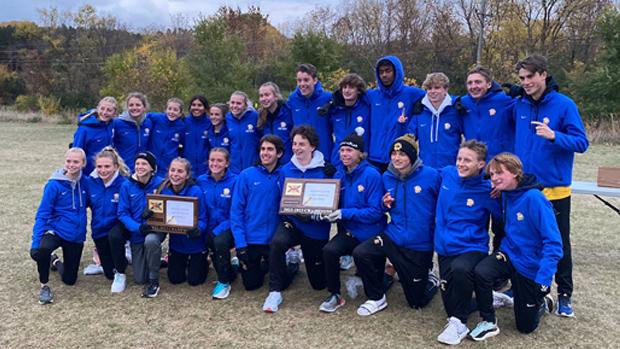 Wayzata Boys and Girls Show Why Their the Best in Minnesota

Both the Wayzata boys and girls won the Lake Conference titles in decisive fashion with the girls winning by 20 points and the boys by 29 points over Minnetonka. Both the boys and girls also showed that they're in championship season form, setting new Minnesota best scoring averages for 2022.

The Wayzata boys ran a season-best 15:40 average for their top five, which is a new best by 8 seconds over the Lakeville North boys with their 15:48 average. This is a huge improvement over their 15:59 average heading into the meet. They now rank #23 nationally for scoring average as of this writing. The Wayzata boys have now won 3 straight Lake Conference titles.

The Wayzata girls dominated the competition and their key rivals at the Lake Conference Championships to take back their Lake Conference title in a decisive fashion. The girls ran an 18:17 scorers average to increase their overall season average to 18:15.9 and to increase their overall best by 5 seconds overall. They now rank #13 nationally for their scorers average.

Abbey Nechanicky, who debuted at #1 in the MileSplit50 rankings today ( ), won her third Lake Conference XC title (also won in 2019 and 2020) and made some history in the process. Nechanicky ran a time of 16:51.95 to break the Gale Woods Farm course record, broke the Lake Conference record, and became just the 2nd Minnesota girl ever to run sub 17 minutes twice.

Nechanicky broke the previous Gale Woods Farm record held by Emily Covert who ran a time of 16:56.40 back in 2018 and coincidentally became just the 2nd Minnesota girl just to run under 17:00 in the 5K twice, alongside Covert. Next fall, Nechanicky will join Covert at the University of Colorado.

Nechanicky has now stayed undefeated on the season, holds the #4 time nationally in the 5K this season (16:47.40), and is one of only two girls nationally to run under 17:00 twice this season (Brooke Wilson, Valor Christian HS).

Hamza Mohamed Shows he is a Class AAA Threat

Hamza Mohamed has been heating up at the right time of the season now and has secured himself as someone to watch for the Class AAA title this fall after his Lake Conference win. Mohamed won the meet with a time of 15:25.20 to beat out reigning Class AAA champion Nick Gilles of Minnetonka.

Mohamed has now won his last two meets in the STMA Invite and Lake Conference Championships and has improved his season-best time from 16:16 at Roy Griak down to 15:25 now. Mohamed now holds the #6 time in Class AAA this season.

Minnetonka's Evie Malec One of the Best in 2027 Class Nationally

After running very little during her 7th-grade season, Evie Malec has burst onto the scene this year and shown that she's not just one of the best in her class in Minnesota, but one of the best nationally. Malec finished 3rd at the Lake Conference Championships with a new PR of 18:17.09 for a 23-second PR.

Malec now ranks first for all 8th-graders in Minnesota this season with her time of 18:17.09, 17th all-time for Minnesota 8th-graders, and 3rd nationally for her class this season.

Malec has now run faster as an eighth-grader at the Lake Conference Championships than Sydney Drevlow (18:25.40) and Abbey Nechanicky (18:32.40) who finished ahead of her this year. She is the highest middle-school finisher at the meet since Nechanicky placed 3rd in 2018.

Minnetonka senior Maya Mor made her season debut at the Lake Conference Championships where she placed 4th overall with a time of 18:19.41. Mor who has dealt with injuries as of late ran her first cross country race since the 2020 Section 6AA Championships.