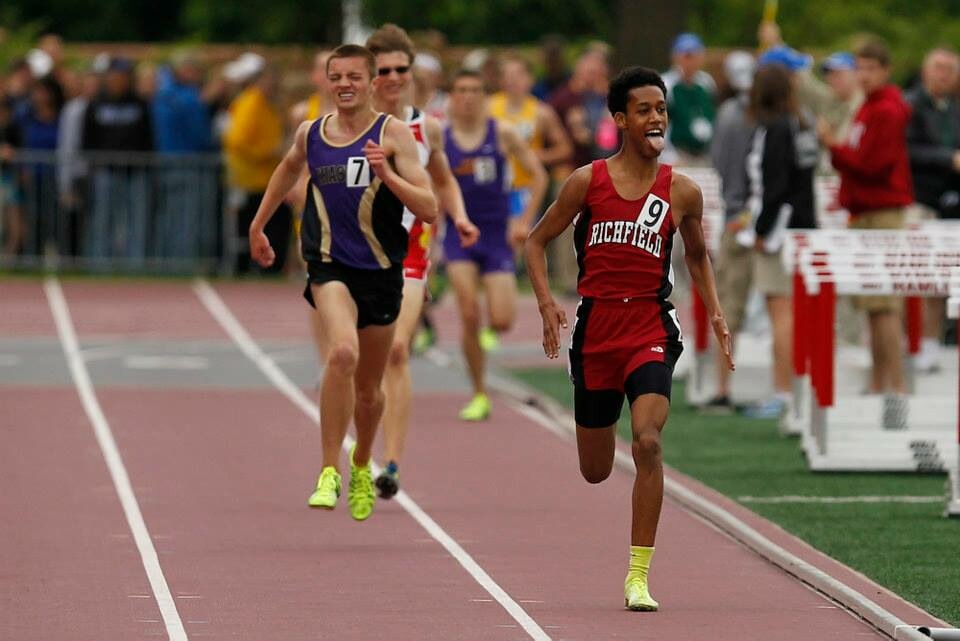 Ali, as he realizes he will break the record, followed by Duerr and Krahn.

Speaking of Mike Torchia, his younger brother, Ian Torchia (Rochester Lourdes), competed in the Class A Boys 3200 race on Friday night.  Ian and his family attended Mike's wedding earlier in the day.  His family then arrived at the state meet in their wedding finery to cheer Ian on.  Ian wasn't able to complete the race, having suffered a stress fracture in the section meet a little over a week earlier.  The Torchia family all greeted him as he exited the track following the race.  As a family of runners, they had great appreciation for Ian's accomplishment to make it to the state meet, and the strength it took for Ian to pull out of the race at the mid-point, realizing he simply wasn't going to be able to finish. 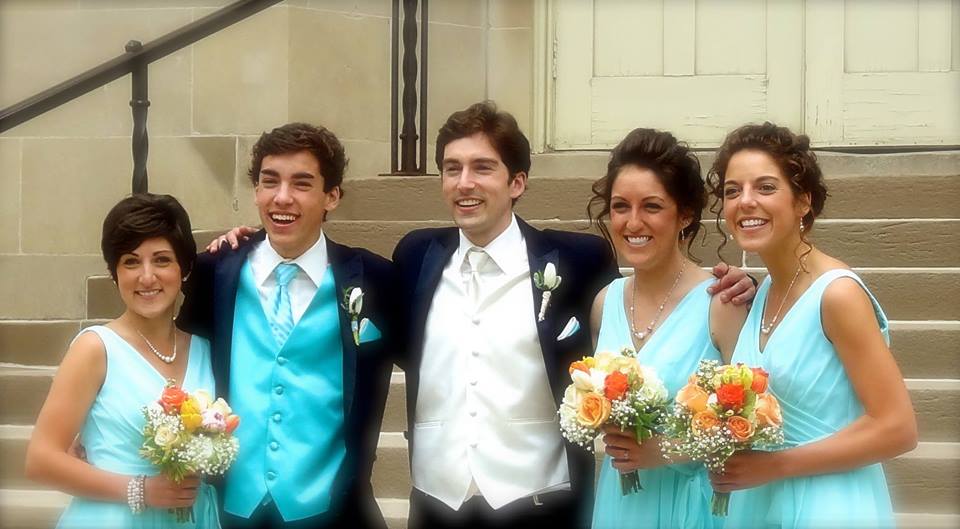 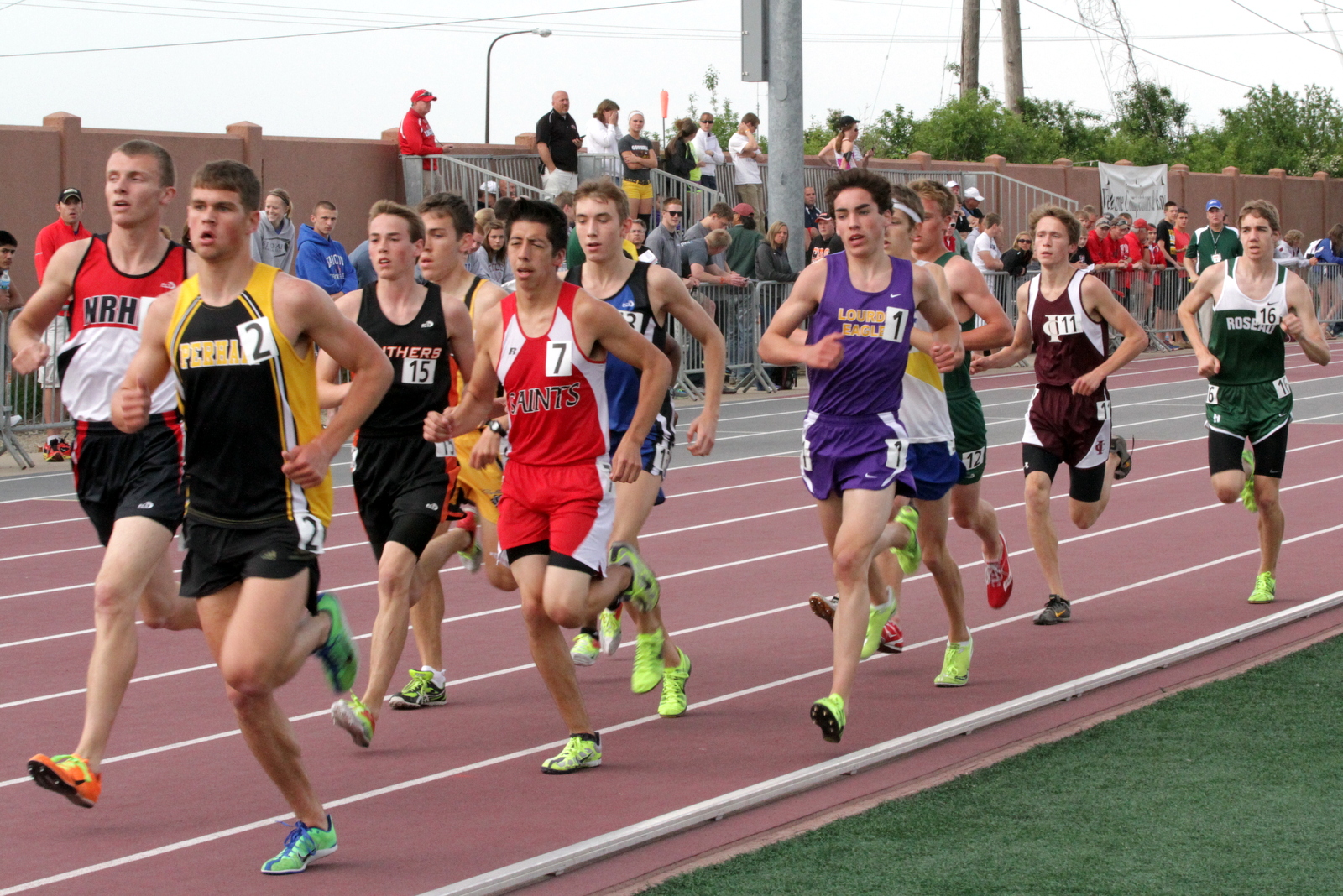 Torchia (top) as a member of the wedding party and (bottom) in purple, as he runs the backstretch of his last lap

Every athlete has a dream of not only competing on the stage at state, but of being named state champion.  As competitive athletes, they all know someone will achieve that dream - and someone will finish in last place.  After the Class A Girls 3200 race I watched as Shannon Strickland (Rochester Lourdes) approached her coach in tears after finishing in 16th place.  Her coach quickly gave her a big hug and reminded her that, of the hundreds of athletes who had started the season running the 3200, she was one of only 16 in Class A who was still running it in June at the state level.  Congratulations on a remarkable accomplishment! 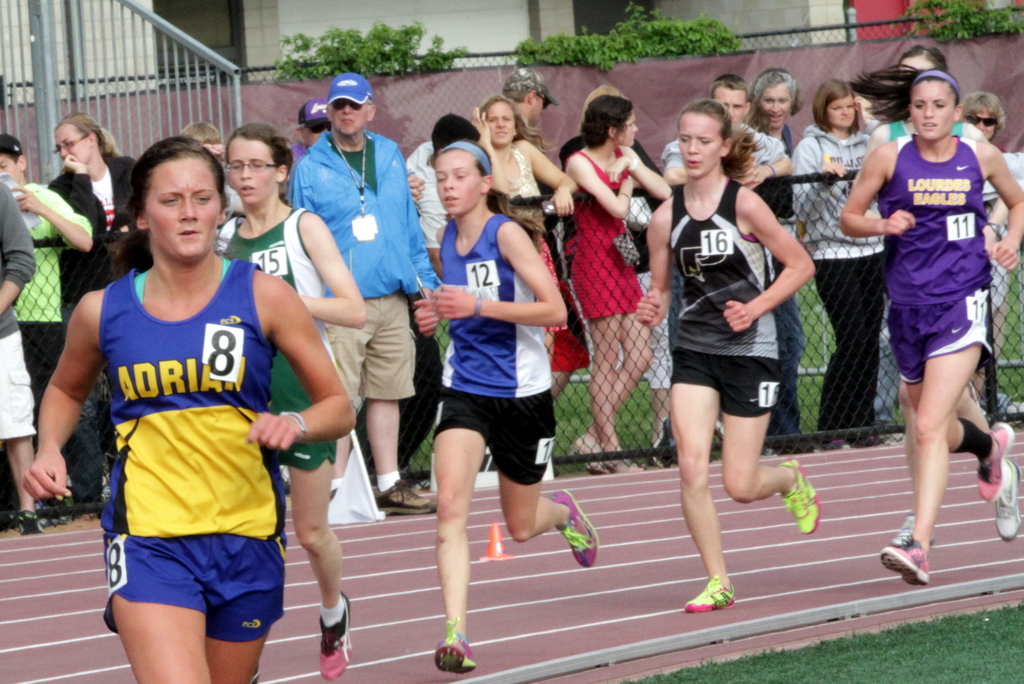 It was a phenomenal weekend at the pole vault with meet records being set in three of the four competitions, and the Minnesota All-Time record set in the Class AA Girls Pole Vault.  Mitchell Valli (Buffalo) broke the Class AA Boys Pole Vault meet record set by Tim Koupal (Anoka) in 1997.  He finished with a final vault of 15-07.50.  9th grader Andrianna Jacobs (Rochester Century) had nerves of steel as she hit 13-00.00, setting a new Class AA Girls Pole Vault meet record and Minnesota All-Time record, set in 2005 by Alicia Rue (Robbinsdale Armstrong).  In the Class A Boys Pole Vault, Grant Krieger (The Blake School) was named state champion, vaulting 15-06.00 and broke the record previously held by Chip Malmstrom (Mahtomedi) and Jon Anderson (Mahtomedi). Tyler Tappe (Pequot Lakes) matched the vault, taking the runner-up spot on the podium.  It has actually been a great year for the pole vault - Krieger set the Minnesota all-time vault record of 16-00.00, hitting that mark at the Tri-Metro Conference meet in May and Lee Bares (Lakeville South) set the Class AA All-Time record of 15-09.00 at the 1AAA True Team Meet in early May. 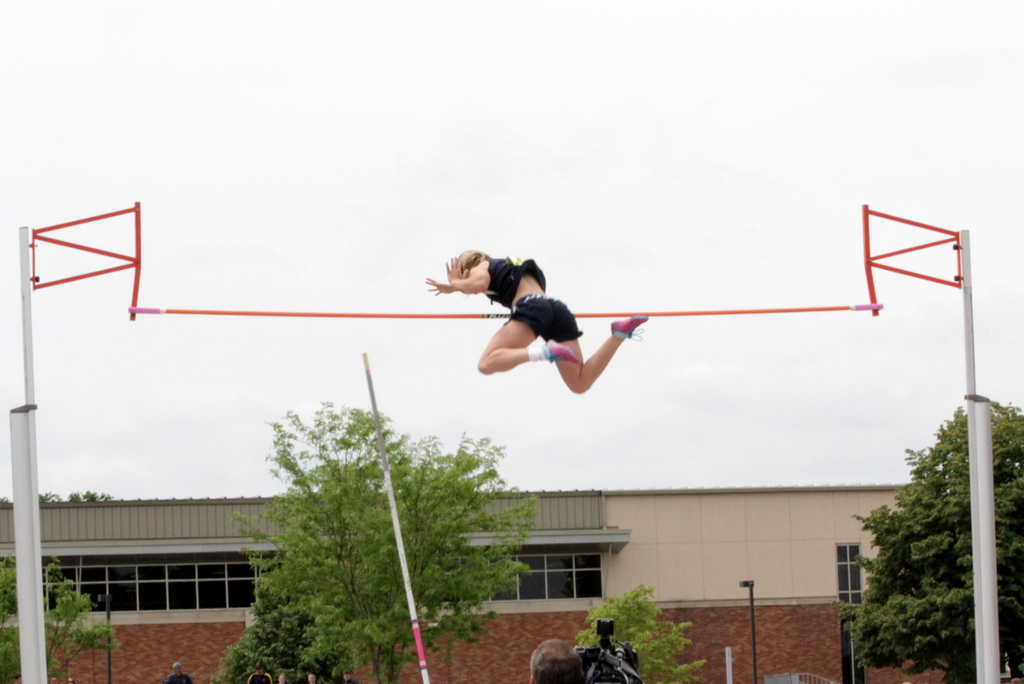 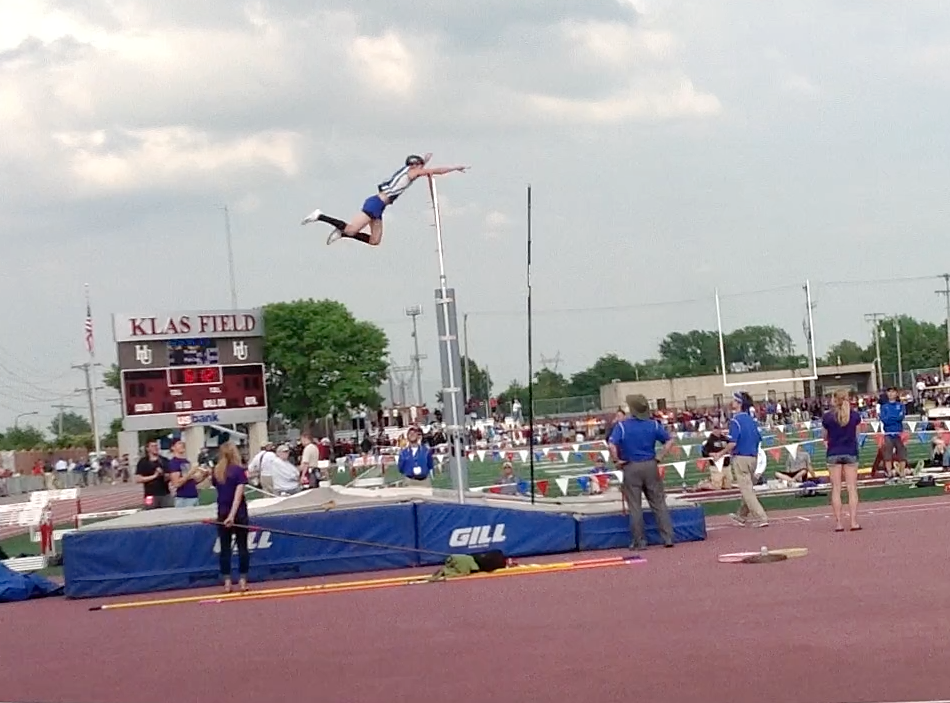 As the runners approached the clerk tent to check in for the Class A Girls 800 prelims, Morgan Durbin (Cathedral), learned she would need to change her spikes before she could run.  In a panic, she scanned the crowd for her coach, nervousness beginning to set in.  Spikes were made available by the Belgrade-Brooten-Elrosa head coach, Micki Weller and, when the clerks were unable to remove the spikes, another coach, Rich Schimenek from Sartell-St. Stephen, stepped in and helped change the spikes.   Durbin approached the infield with time for just one run-out before her race.  Following the race, and before she knew the outcome, she again approached the clerk's tent - this time to thank each of the MSHSL workers for doing all they could to maintain calm in a situation that clearly had her a bit shook.  Durbin went on to qualify for finals to be run the next day - and the clerks were still talking about it at the end of the meet. 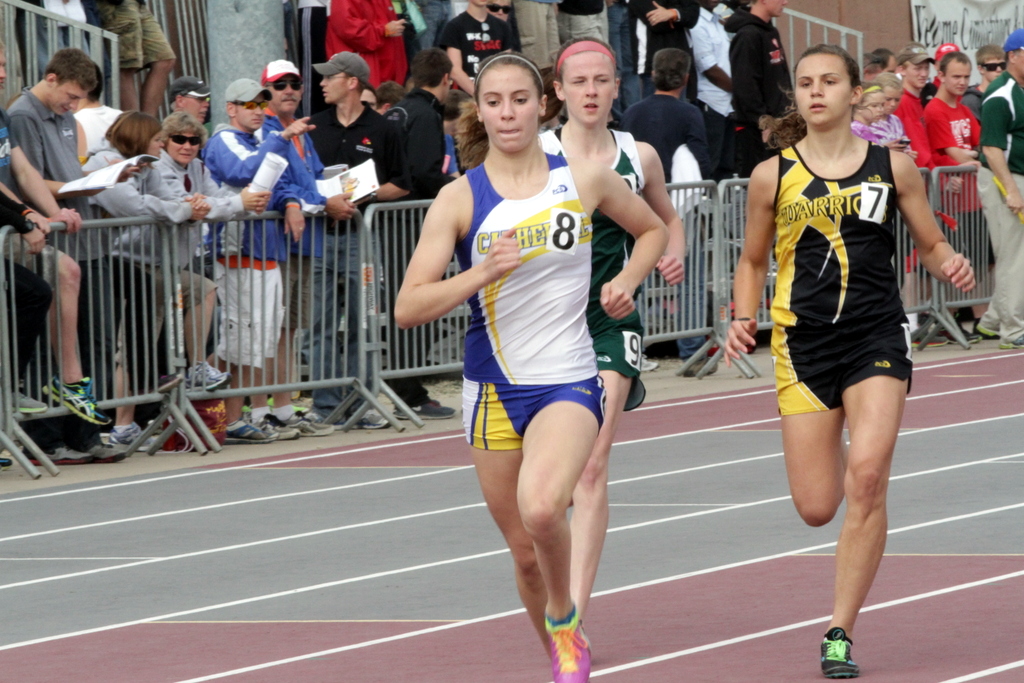 Maria Hauger (Shakopee) has become one of the most decorated distance runners in Minnesota with 4 state titles in cross country under her belt, and earning her 3rd Class AA 3200 state title this weekend.  But, besides being a top distance runner, she has also taken on the role of mentor to 8th grader Tess Misgen (Shakopee).  They both competed in the Class AA Girls 1600 this weekend with Misgen passing her mentor on the final curve and ultimately becoming the state runner-up to Jenna Truedson (Bemidji).  Hauger's father also happens to provide strength training to both as well!  Hauger passes the Shakopee distance running torch to Misgen as she moves on to begin her collegiate career. 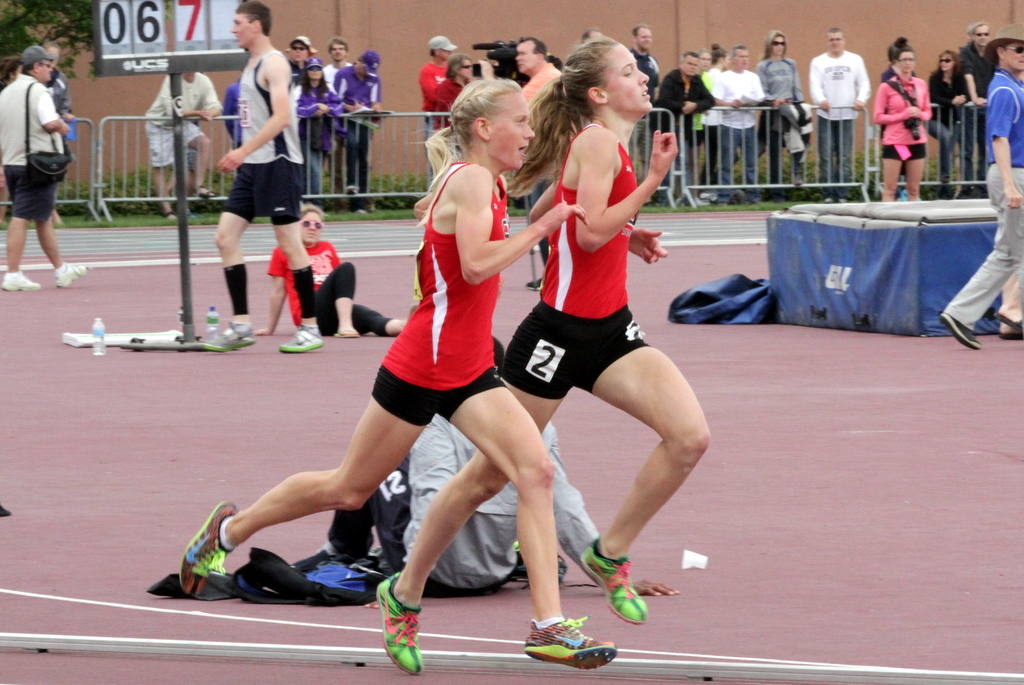 There are so many more stories that are part of any championship - watching Boston Braack (Duluth Denfeld) complete his 800 race after pulling a muscle in warmups to the cheers of the other 15 runners waiting for him at the finish line; seeing Breanna Shofner (International Falls) make it to the podium in the Class A 100 and 200 meter races while her biggest fan, her father, was watching from above as he lost his battle with cancer in April; watching competitors cheer each other on in their races; seeing new friendships being made, and old friendships renewed.  Congratulations to all of the athletes who competed this weekend.  Enjoy a few days of rest - we'll be watching for the next great things you do!

Photo of Obsa Ali from the Star Tribune

Other photos courtesy of David Eickhoff