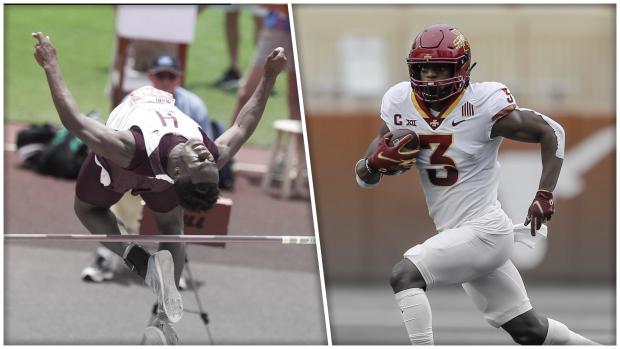 Before transferring to IMG Academy in Florida, Mond attended San Antonio Reagan high school, where he competed on the track and field team in 2015. Mond ran in the 200m and 400m dash. He posted very respectable times of 23.45 in the 200m dash, and 49.31 in the 400m dash. His 49.31 400m dash was tied for the 96th fastest time in Texas that season. It would've been the 13th fastest time in Minnesota that season. Jones attended Grassfield High School in Chesapeake, Virginia where he was a standout on the track and field team as a thrower. Though he only competed in 2014 and 2015, he did plenty enough to leave his mark. In 2015 he set a discus PR of 162-10 and then went on to finish in 2nd at the VHSL Group 5A/6A State Outdoor T&F Championships only behind teammate Owen Chappell.

Jones was teammates at Grassfield in 2015 and 2015 with Grant Holloway. Holloway would go onto a distinguished career at the University of Florida where he would win 8 NCAA Championships. He is also the current world record holder in the indoor 60m hurdles. Before he was hurdling people on the football field at the University of Iowa, Ihmir was running over actual hurdles in New Jersey and on the national level. In his final outdoor track and field season in 2016, Ihmir won the Emerging Elite 110m Hurdles at New Balance Outdoor Nationals and finished third in the Emerging Elite 400m Hurdles at the same event.

See: Watch the Weequahic Boys Run 57.82 In the Shuttle Hurdles at Blue Devil

Ihmir was a very impressive high school track and field athlete as evidenced by his long PR list below: Davidson embarked on a brief track and field career at Webb City High School but showed promising athleticism when he did compete. Davidson his sophomore year had PRs of 52.52 in the 400m dash and 24.70 in the 200m dash.  He started his collegiate football career as a punter, but eventually switched to being a tight end. Maybe his speed helped with the switch?