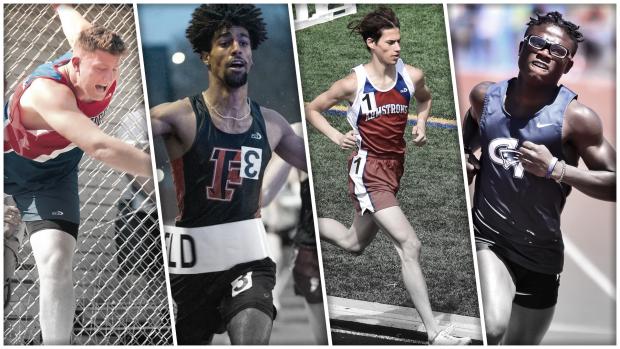 As usual, the Minnesota boys had a historic season with many top ten all-time marks, state records, state meet records, and more!

Here we look at the 2022 candidates for the Minnesota boys track and field athlete of the year! If you want to vote, scroll below past the athlete bios to vote!

Hayden Bills uncorked a discus throw of 196' 2" to set a new personal best, a state meet record, and the 4th best discus throw by a Minnesota boy all-time. Went undefeated in the discus event all season and set a new Rosemount school record in the event.

Max Reis was one of this season's biggest surprise runners setting huge new personal best times in the 100m and 200m. Reis won the Class AA state titles in both events. He ran times of 10.41 and 21.87 that rank among the best times in state history.

Blake Nyenati was the Class AAA state champion in the boy's 110m and 300m hurdles, running some of the state's all-time best times in the events on the way. His 300m hurdles time of 37.38 ranks him #3 all-time among Minnesota boys.

Noah Breker continued his distance dominance in the 3200m and 2-mile this year, setting some all-time great times along the way. Ran the state's best time in the 3200m with a time of 9:03.25 en route to winning the state title. At NSAF Nationals, finished 2nd with a time of 8:54.53 that ranks #6 all-time in Minnesota.

Jarod White set a new state record in the pole vault with a vault of 16' 2" at the Section 1A Championships. Vaulted 16 feet or higher twice this season, the only MN boy to vault 16 feet more than once. Won the Class A state title in the pole vault and broke his own state meet pole vault record.

Tony Nelson had a monster throw of 64' 5.5" to win the Hamline Elite Meet shot put event. Ranks as the 5th best throw all-time by a MN boy. Won the Class A state title and went undefeated in the shot put all year in Minnesota.