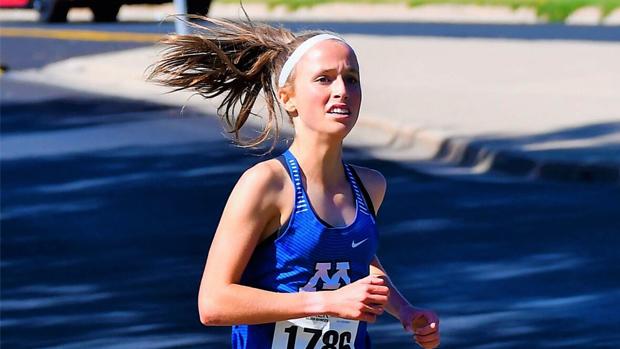 We at MileSplit Minnesota recently caught up with Minnetonka's Maya Mor to talk about her injury this past fall that kept her out of the cross country season, her rehabbing that injury, her return this spring for track and field, and what the future holds for her.

You were unable to compete this last cross country season because of an injury, how did that come about, and were you disappointed you couldn't run?

I started having left hip pain early in the 2021 track season and after months of trying to figure it out, the doctors determined I had two hip impingements which basically are excess bone growths that inhibited my hip joint from moving smoothly. The pinching of the hip caused a labral tear so I had surgery to fix those 3 issues. Around 2 months after the first surgery, I started getting hip pain on the right side and found out I had the same issue, so I got that second surgery in November. It was a genetic problem that became symptomatic because of my frequent movement of the hip with running, so there was really nothing I could have done to prevent it. I don't have a third hip though, so I should be good now :)

To say I was disappointed to miss out on the cross country season is an understatement. It was crushing for me to not get to race and help my team once again. The pain I felt to be missing out on competition was worse than any pain from the physical injury itself.

What has the recovery been like for your injury?

It's definitely been tough not being able to run, but recovery is going as well as it possibly could. I've grown a lot from the past year and learned about myself, which I think is a slight silver lining of everything. Huge shoutout to my surgeon Dr. Ryan Fader and my physical therapists who are helping me get the best chance at competing at a high level this coming track season.

I still have around 28 more days until I can start running again. I am so excited to get back to running effortlessly and be able to fully enjoy the sport. I haven't run 100% pain-free since October of 2020, so I'm looking forward to finally being able to string together a good block of training.

How were you able to support your teammates this year, even though you were unable to run?

I wish I had been able to be more present at practices on a daily basis, but I was rehabbing pretty hard. I was still able to go to almost every race to cheer everyone on and sometimes call splits and was still included in team activities. What I love most about our team is how close everyone is. My teammates and coaches have supported me through thick and thin and I try to do the same with them because they're like my second family.

Now that you're on the mend, how do you expect to do when the track season starts? There is still a lot up in the air about when I'll be cleared to compete and which events I'll be allowed to participate in, but I'm working hard and hoping to be healthy enough to race the majority of the season. I know it will be tough as I get back into running; patience has never been my strong suit and I know it will take time to get back to being 100%. However, I don't expect anything less than the best from myself and am going to put my best foot forward this spring.

Related: Dear Running: Why I Continue To Choose You

What are some of your goals for this track and field season?

I mean I definitely have certain times and other goals I'm looking to hit, but my number one goal is fully recovering from surgery and getting healthy. I know I'm capable of a lot, but I can only do that when I'm not injured so that's my biggest priority. I also don't feel like I've done my part to help our team and play my part in achieving our team goals, so I'm working to get strong and healthy so that I can finally do that.

Come this fall, you will be a senior at Minnetonka. What would you still like to accomplish for your high school running career?

As a team, we have high expectations of ourselves and want that state title amongst other things. We obviously have some great competition, but that only pushes us to be better and we are 100% capable of achieving big things this fall. I want to help our team by being able to compete alongside them and lead us towards those big goals of ours.

Individually I have a lot of unfinished business. I've never raced in a big championship race or even a state meet, so the goal is obviously to get there and be able to compete amongst the best. Like I said in the last question though, my number one goal is to be able to fully recover and stay healthy. If I can do that and string together some great training alongside my teammates, I think the more outcome-type goals I have will come.

What has the college recruiting process been like so far?

It's hard to believe that I'm starting the recruitment process, but so far it's been really exciting! It's obviously still relatively early in the process, but I'm looking forward to finding the program that is the best fit for me.

What has been your favorite high school running memory?

Despite all the lows, there have been so many high points in my high school running career that it is hard to decide on one specific memory. I honestly just love training with my best friends day in and day out, but if I had to pick my favorite memory it would be the Lake Conference race at Round Lake in EP during the 2020 cross country season. I feel like the pieces really fell into place that day and our team was really able to show the world what we're capable of. Obviously, there have been other races like that since then, but that was just a great day that stands out as I look back on the past few seasons.