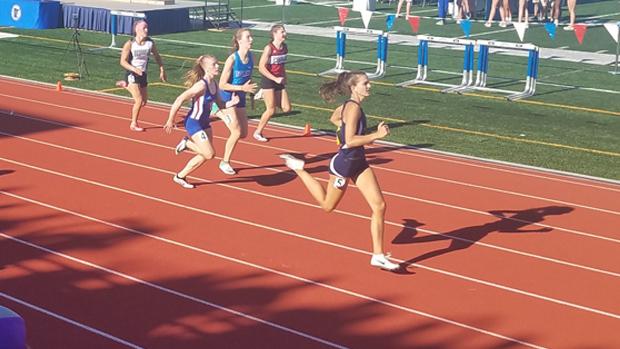 Cinnamo is the reigning state 100m and 300m state champion out of Class AA, and she will look to end her high school career on a high note this spring.

We at MileSplit Minnesota recently caught up with Ava Cinnamo to talk about her start in track and field, her senior season, and what the future holds for her. You are still relatively new to the sport of track and field, how did you first decide to join?

I actually have been running track since I was in kindergarten, through the Rosemount RAAA youth program. Both of my parents participated in the track and field program at Luther College, so I grew up with parents who felt strongly about the benefits of track and signed me up at a young age and fell in love with it!

What goals do you have for this upcoming track season?

I have some big goals for myself this season, not only in the hurdles but also in the triple jump. My goal in the 100 hurdles is to get close to or break the school record of 14.08. In the 300 hurdles, I also want to break the school record of 43.87. Finally, in the triple jump, my goal is to break the state record of 41'2.25''. Last season at the state track meet, the schedule didn't allow me to participate in my 4 events to the best of my abilities. The events were so close to each other that by the triple jump, my legs were exhausted. Last summer I was doing a lot of training as well as participating in meets.

How do you plan on repeating as the state champion in both the 100 hurdles and 300 hurdles?

My off-season training is going to put me in a very good position to win both of the hurdles again. The rest of it is dependent on my competitive athletic drive.

Do you have the aspiration to break the 100HH or 300H state records this spring?

Breaking the state hurdle records would be a very lofty goal and I would be ecstatic to break them. I am working on training, technique, and if my preparation leads to me breaking the state records, then that is just a plus!

How do you train in the off-season for track and field?

In the off-season, I am doing a lot of running in the dome and on the assault treadmill. As well as some speed work, longer sprints, like repeat 200s, 250s, and lifting. I have also been working on my triple jump phases, hurdle technique, lots of bounding, and quick hurdle drills to escalate my form.

What is your favorite non-hurdles event to compete in?

I love to compete in the triple jump! I have always been a natural bounder. People would joke around that I would bound down the basketball court and to the serving line for volleyball. The very first time I saw the triple jump, I thought I might be decent at it since I already had the bounding down. My freshman year I decided to give it a whirl and ended up hurting my back. I guess it wasn't as easy as I thought it would be. I needed to get stronger and came back to it last year as a junior and found my love for it.

You are a graduating senior this spring, is there anything you'd still like to accomplish as a high school runner?

I would love to have a total of 4 school records at Rosemount High School.

You are committed to Iowa State, how did you come to that decision?

Immediately upon my arrival onto campus, they made me feel like family, which is very important to me. The atmosphere of the campus is full of nature, which I love. Everyone was so welcoming and very positive. I also liked that the team was on the smaller side and the athletes were close with one another. Being part of a smaller team also enables the possibility for some one-on-one coaching. The coaching staff are all so encouraging and supportive, they made me feel like I could really contribute to the team and program. I am very excited to grow as an athlete with this team and show them what I can do!

What would you like to accomplish as a collegiate athlete and how can the coaches at Iowa State help you do that?

As a collegiate athlete, I'd like to accomplish first and foremost a college degree. I want to enjoy my classes and stay on top of performing well in the classroom as much as on the track. Coaches at Iowa State put classroom academics high on their list of priorities, they want all of their athletes to succeed. Through personal checkups and the tutoring program that is offered to all student-athletes, it makes it very hard to not be successful. Accomplishments I want to achieve on the track and in the pit consist of jumping over 43 feet in the triple jump and in the 100 hurdles running under 14.0 seconds. Finally, in the 400 hurdles, I would like to run under 58 seconds! Iowa State's coaching staff is extremely positive, fun and has the drive and determination to make their program great, but at the same time, will push me as an individual, to reach my full potential through rigorous workouts, positive feedback, and energy, weight training and mental toughness. I believe these qualities that the Iowa State track coaches have are going to allow me to touch if not grab my collegiate athlete goals!

Other than your own teammates, who are some of your favorite athletes to compete against?

I like to compete against the best in whatever situation/event I am in!

What was your favorite moment of your high school track career?

My favorite moment in my High School track career would have to be winning the 4x400 meter relay at the state meet when I was a freshman. The scenario was, a couple of teams had combined scores that were close, which led to, whoever won the 4x400 would be taking home the state title. Coming out of prelims, we had a time of 3:58.57, we were seeded 7th going into finals. As we were warming up, we had no idea that the state title would come down to this race, until our coach, Mrs. Hatleli told us. After she left, we were like, "guys, it's okay, we just all need to try our best and that's all that we can do". I was the lead leg and passed the baton off 1st or 2nd, to our second leg Lauren Peterson. She was in 2nd cutting in and then pulled ahead at the home stretch. Our third runner, Amber Johnson took the lead at the first 150-meter mark and led the last 250 meters passing the baton off to our anchor, Jenna Johnson, her sister, and the lead became greater as she made her way around to the last 100 meters. We ended up winning the race with a time of 3:51.89, just shy of the state record. It was the most exhilarating moment in my track career. Not only did we win the relay, but also claimed the team State Champion Title.

I was in the Miss NAM pageant, when I was a freshman!