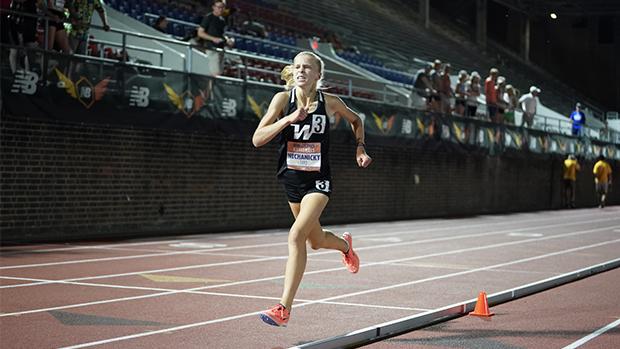 Here we look at the Minnesota boys who competed and how they fared in their event(s).

Breker made state history in Oregan in the boy's Championship 2-mile when he became just the 6th Minnesota boy all-time to run under 9 minutes in the 2-mile race. Breker ran a time of 8:54.53 to finish 2nd at nationals just a split second behind Myles Hogan. His 2-mile time of 8:54.53 converts to an 8:51.43 3200m, which ranks 6th all-time among Minnesota boys. He is only behind Elliott Heath, Mike Torchia, Rob Finnerty, Hassan Mead, and Joe Klecker.

Zinter again competed in the heptathlon at nationals for the second year in a row. After finishing in 5th place with 4,975 points last year, she finished as the national champion this year with 5,122 points. With her 5,122 points, she beat out runner-up Evie Culbreath by over 400 points.

Zinter took the win with remarkable winning performances in the girl's 200m, 800, and javelin heptathlon events. Most impressive is that Zinter PR'd by about 6 seconds in the 800m with a time of 2:10.47 which is the 9th fastest 800m time all-time by a MN girl.

Nechanicky continued her impressive comeback season (after injury) this spring with a 3rd place finish in the girl's 2-Mile Championship race. Nechanicky ran a 10:10.07 to finish third overall behind Angelina Perez and Zariel Macchia.

Lakeville North's Andrew Casey competed in the boys 800m Championship race and the boys 400m Rising Stars race at New Balance with exceptional results. In the 800m Championships, Casey ran a 1:51.60 for a 7th place finish. Casey was only 1.43 seconds from 2nd place overall, and 0.46 seconds away from winning his heat. 800m winner, Cade, Flatt ran a 1:46.48 to beat everyone else out by almost 4 seconds for comparison.

Skelly, Elliott McArthur, Victor Lelinga, and Maximus Gregory broke their own state record in the boys 4x800m at nationals with a 3rd place finishing time of 7:36.72 to break their own record by about 3 seconds. They had previously broken the long-time state record held by Stillwater earlier this season.

Skelly also ran in the boy's championship mile where he finished in 10th place with a time of 4:11.98 which is just off his personal best time.

Cinnamo had a packed schedule at nationals competing in four events. Overall Cinnamo had a successful meet with a 3rd place finish in the triple jump, 8th in the long jump, 11th in the 100m hurdles, and 13th in the 400m hurdles.

Pequot Lakes Calia Chaney came out of Oregon a champion with her win in the girls 800m Emerging Elite. Chaney ran a time of 2:12.67 to take the Emerging Elite win by just under a second. This is a new personal best time for Chaney and is the 9th fastest 800m time all-time by a Minnesota sophomore girl.