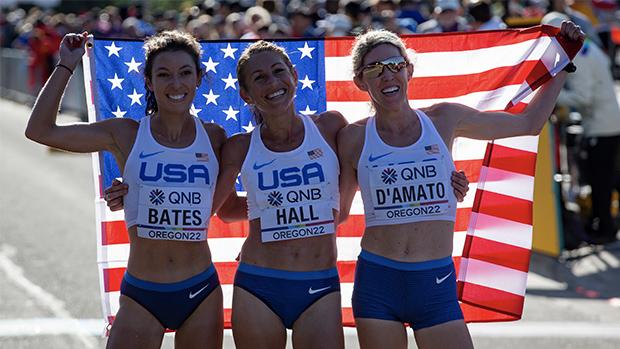 Former Elk River standout Emma Bates surprisingly never won a state title as a high school runner. Since graduating in 2010 though, she has made a name for herself at Boise State University and as a pro runner. She was a 12x All-American at Boise State, won the 2014 NCAA 10K title, and was the 2018 U.S. Women's Marathon Champion.

Now she can proudly say that she is among the top women's marathoners in the world. Bates finished 7th in the marathon at the 2022 World Outdoor Track and Field Championships. She ran a time of 2:23:18 for a new personal best in the marathon.

Bates was the second American finisher after Sara Hall and finished one spot ahead of teammate Keira D'Amato. The winner of the women's marathon was Ethiopia's Gotytom Gebreslase who finished with a time of 2:18:11.

This was Bates first time competing at the World Outdoor Track and Field Championships.

Bates was a 2010 graduate of Elk River High School. While there, she was a five-time all-state runner in cross country. She was state runner-up by less than a second, almost catching the leader at the end, her senior year when she led the Elks to the 2009 state championship.

She also medaled several times in track in the 1600 and 3200. She almost won the 1600 in her final prep race, leading down the last straightway before three girls passed her at the end.