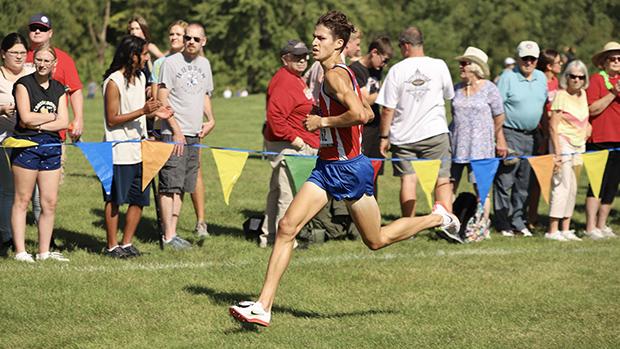 The 2022 Minnesota cross country season is off to a hot start with fast times, big team and individual wins, personal bests, and yes hot temperatures. This past week was the first full week of meets of the season and that means it's time for you to vote for the runner for the week.

So without further ado, here are this week's nominees for the Minnesota male cross country runner of the week for August 28th through September 3rd:

Noah Breker (Robbinsdale Armstrong): Breker started off his season hot with a win in his first race at the St. Olaf High School Showcase with a new meet record time of 15:26.10. Breker beat out a loaded field that included his chief competition for the state title this fall in Sam Scott, Nick Gilles, Aidan Jones, and Andrew Casey. His 5K time is the tops in Minnesota so far this fall.

Elliott McArthur (Mounds View): McArthur who has state title aspirations this fall started off his season in the 2-mile event at the Rosemount Irish Invitational where he won the boy's race in a time of 9:54.67 in a race to the finish line over Como Parks Charlie Power Theisen. If the Mounds View boy's schedule is accurate, we won't see McArthur run another varsity race until the Roy Griak on the 23rd.

Nolan Sutter (Chaska): Two races and two wins so far this season for Nolan Sutter. Sutter first won the St. Paul Central Open in a then state-leading time of 15:45.20. He then came back the next week and won the Shakopee Invitational 2-mile race by 41 seconds with a time of 10:02.19. His 5K time ranks him 4th in Minnesota while his 2-mile time ranks him 3rd.

Cameron Stocke (Rock Ridge): Stocke got off to a hot start to his senior season with a win at the Rock Ridge Invitational where he ran a time of 16:17.18 to beat runner-up Noah Foster by a minute and twenty seconds. It's a nice start to the season for Stocke who didn't break that 16:17 mark until well into the 2021 season last fall.

Salvador Wirth (Annandale): Wirth came into the season as the #2 ranked preseason runner for Class AA and he lived up to that billing with a season-opening win at the Big Lake Battle At Liberty Invitational. Wirth ran a time of 16:02.40 to beat out runner-up Noah Mahoney by 13 seconds. Overall he beat out #7 and #11 preseason ranked runners for his class.