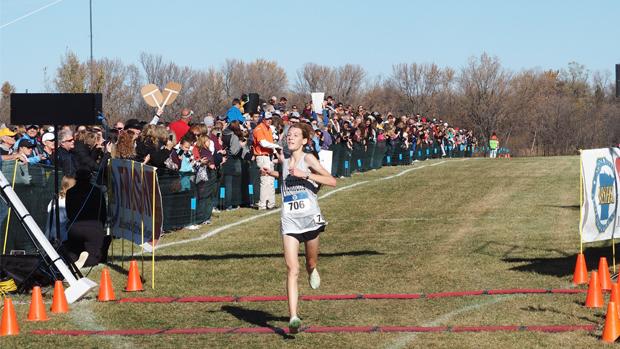 It was another full week for cross country in Minnesota last week with meets going on all around the state, times getting faster and faster, and with championship season on the horizon, things will just get better and better.

So without further ado, here are this week's nominees for the Minnesota female cross country runner of the week for September 25 - October 1.

Megan Lee became just the 5th Minnesota girl this fall to run under 18:00 for the 5K this season with a time of 17:47.42 at the Steve Johnson/Dan Huston Invitational for a 2nd place finish overall behind Addison Dorenkamp. That was a 37-second PR for Megan over her 18:24 performance from last year's Heartland Regional.

Carley LaMotte has shown that she is a runner to watch for the future with her win at the Farmington Cowbell Classic where she finished 1st overall with a new PR of 18:57.20. LaMotte has now won her last two meets and ranks 3rd among all freshmen girls in 5K times in Minnesota this fall.

Amanda Overgaauw as has been the trend the past year, won another cross country meet at the Murray County Central Invite for her 5th straight win of the season and her 16th straight cross country win overall. Overgaauw dipped back under 18:00 for the 5k for the 4th time this fall which is the most in Minnesota ahead of Abbey Nechanicky with 3 instances under 18:00.

Macy Hanson won her first meet of the season at the Saint James Invite where she ran a time of 18:13.85. Hanson ranks 2nd overall in her sophomore class this fall in Minnesota, only behind Sydney Drevlow. She also ranks 1st in Class AA.

Who was the MileSplit Minnesota Female Runner of the Week? (Sept. 25-Oct. 1)