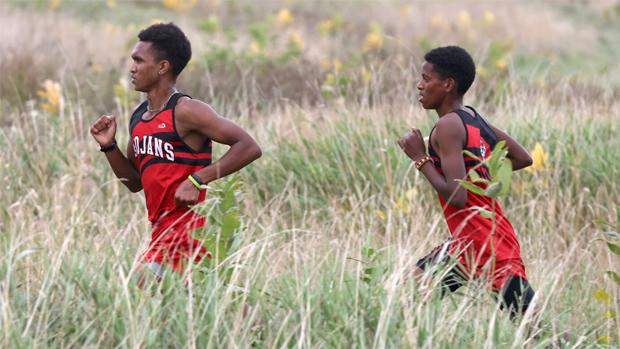 With almost 40+ meets this week with Minnesota teams competing in Minnesota, Wisconsin, Iowa, and North Dakota, there were plenty of meets, PRs, breakthrough performances, and more to comb through to find our 5 boys nominees for Minnesota male runner of the week.

So without further ado, here are this week's nominees for the Minnesota male cross country runner of the week for September 11-17.

Mikele Walu won his 2nd meet in a row and both his meets for the week with a new 5K PR of 15:38.96. Walu has shown huge in-season improvement dropping his 5K time this season by over 3 minutes and improving his overall PR by 1 minute and 24 seconds from last season's best time.

Andrew Casey continued to lead the Lakeville North boys on their undefeated season with a win at the Lakeville AppleJack Invitational where Casey won the meet with a new PR of 15:24.20. Casey now holds the course record there and broke the Lakeville North school record that had been held for 16 years. Casey also now ranks #4 for all boys in Minnesota this fall.

Emmett Gerres dominated the field at the Norwood-Young America Lions Invitational where he won the meet with a new PR of 15:30.39 to finish almost a minute ahead of the runner-up and helped lead the Belle Plaine boys to a dominant team win. Gerres ranks #6 for all Minnesota boys this fall and #1 in Class AA.

Fanuel Wolday was not far behind his teammate Mikele Walu at the Worthington Turkey Trot Invitational finishing 2nd overall with a new PR of 15:42.19 at his home meet. Wolday has improved his time by over 3 minutes from his first meet of the season and holds the #1 time in Minnesota for all sophomore boys.

Charlie Power Theisen set his 2nd PR of the cross country season at the DeLaSalle Islander Invitational where he ran a new 5K PR of 15:39.38 to beat out Breck's Harris Gulbransen by 20 seconds. He helped lead the St. Paul Como Park boys to a team win and his time of 15:39 ranks #3 in Class AA this fall.

Who was the MileSplit Minnesota Male Runner of the Week?