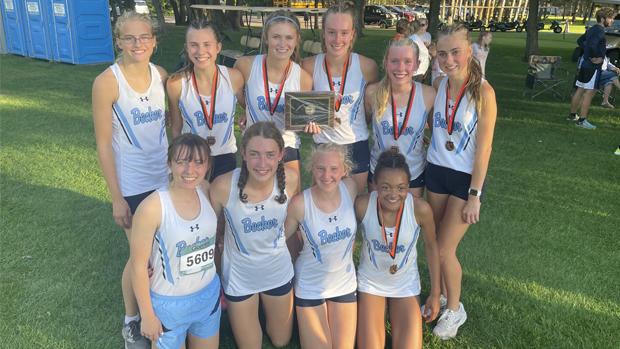 With almost 40+ meets this week with Minnesota teams competing in Minnesota, Wisconsin, Iowa, and North Dakota, there were plenty of meets, PRs, breakthrough performances, and more to comb through to find our 5 girls nominees for Minnesota female runner of the week.

Here we look at those five chosen runners to see what merited their inclusion in this week's poll for Minnesota female runner of the week.

So without further ado, here are this week's nominees for the Minnesota female cross country runner of the week for September 11-17.

Luna Scorzelli ran a new 5K PR of 18:08.20 in her first 5K of the season and almost helped lead the St. Paul Highland Park girls to a major upset over Wayzata at the Eden Prairie Metro Invitational. Scorzelli finished 2nd overall and helped Highland Park to a 19:22 average time and a 41-point finish that was only 8 points behind Wayzata. The Class AA powerhouse now ranks as the #3 team in Minnesota.

Abbey Nechanicky ran her second race of the year at the Eden Prairie Metro Invitational and again blew the field away with a time of 17:17.10 that beat out the runner-up by 51 seconds. It was Nechanicky's second fastest 5K ever behind her 17:08.90 and helped lead the Wayzata girls to a team win.

Adele Changamire charged forward at the 2022 Little Falls Lucky Lindy Invitational for her third straight PR in the 5K with a time of 19:29.60. She helped lead the Becker girls to a strong 4th place finish at the meat behind Alexandria, Staples-Motley, and Perham. Her time of 19:29.60 ranks her #5 nationally for her class (2028).

Amanda Overgaauw extended her win streak to 14 meets in a row with two wins this week at the Marshall Invite and the Worthington Turkey Trot Invitational. At Worthington, Overgaayw ran a new personal best time of 17:24.71 that ranks #2 in Minnesota this fall, #1 in Class A, and is the #20 time all-time by a Minnesota high school girl for the 5K.

Who was the MileSplit Minnesota Female Runner of the Week?