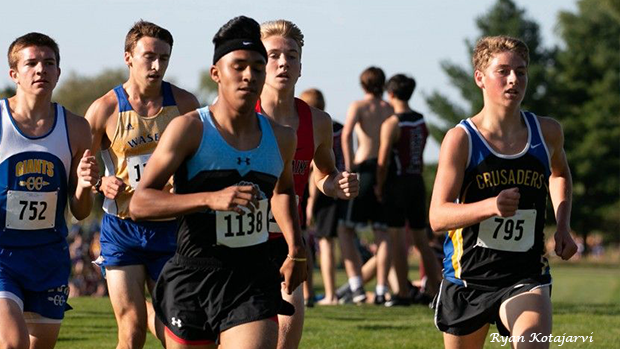 The Skinny: The third-ranked team in Class A, the Loyola/Cleveland boys are recovered nicely from the exodus of three key members from last year's podium team at State. While they will not match last year's accomplishment of going undefeated in the regular season, they have seen a lot of encouraging signs that this team, too, can end up on the podium, not the least of which being the arrival of freshman Tyler Erickson, who has taken hold of their fifth-runner spot and already hit 18:20 in the young season. They ought to win today's meet pretty handily. That said, Martin County West has seen a ton of really encouraging growth this year and have five runners who have run 18:22 or better. If they continue developing, they could make a few waves towards the end of the season. On the individual side of things, Mitch Johnstone and Hugo Ruiz will be facing each other an astounding fourth time already in the young season, with Ruiz coming on top twice while Johnstone won the most recent race on Tuesday. One of the two All-State runners  will almost certainly come away with the win, but Bailey More could certainly mix it up with them, nearly finishing All-State himself last year, though he's been a step behind Johnstone and Ruiz so far. MCW's Larson and Kahler could compete for a podium finish too, along with Johnston'es teammate Jerrett Peterson.

The Skinny: Marissa Whitehead's season probably hasn't gone as well as the four-time All-State runner had hoped it would, especially after sitting out the last track season. But she's also raced against three very tough and talented fields this year, so perhaps a possible win in a smaller meet like this could be just what she needs to jumpstart her season. That's not to say, of course, that she's in a class of her own today. Saint Peter's Izzy Lind was nearly All-State herself last year, and also qualified for State last track season, while Grace Feder of GFW took tenth in the 1600m last spring. Those two girls will provide a good challenge for Whitehead, and it should be an excellent race. A good finish for Whitehead will also help her team, as the virtual meet projects a win for Martin County West, though Saint Peter has looked just as strong through the two teams' first couple meets. The depth of Martin County West, however, should be enough to put them over the top.