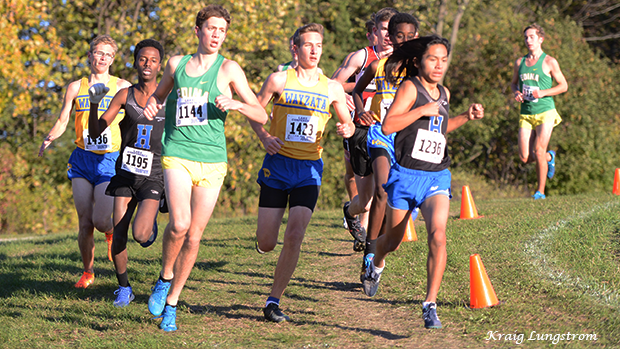 If anyone wanted to find out what the best teams in Minnesota are in any given year, they could get a pretty good idea just from watching the Lefty Wright Grade Level Challenge. Serving as a kind of JV Championships for 23 of central and metropolitan Minnesota's best teams, Grade Levels is a chance for programs show off their incredible depth on a quick course, and their results often rival those of other schools' varsity teams. In addition, this race serves as a proving ground for JV runners. The pool of Grade Level Champions is an elite one, boasting runners like Wayzata's individual State champion Khalid Hussein and current 2nd-ranked Andrew Brandt, as well as Edina star Jack Manderscheid who went on to place 4th at State in 2015. Trojans standout Jaycie Thomsen won the girls Sophomore and Under division twice and made her team's State-qualifying squad the next year. In fact, fifteen of Grade Levels' individual champions in the past five years have gone on to compete with their team's varsity squad. Hannah Mitchell of Edina and Kyle Brandt of Wayzata even went on to compete at Nike Cross Nationals in the same season in which they won their respective Junior/Senior races (2016 and 2014). As one might be able to tell, much of the competition has been dominated in recent years by powerhouses Edina and Wayzata. No non-Lake Conference team has won a team title as far back as the online records go to 2003. Since 2013, Wayzata has taken fifteen individual titles and eighteen team ones, while Edina has collected ten individual wins and six team titles. In 2017, the Eden Prairie boys team won the Freshman and Under race. Lake Conference domination will continue this year, but Eden Prairie looks poised to pick up a few more wins in an attempt to even the score.

The Skinny: Though Wayzata's Shuayb Hussein comes in with the best time clocked this season, he only just squeezed ahead of Edina's Tate Huss and Sean Baird with a 17:15 to their 17:18 at Lake Conference Championships last Monday. However, it was Wayzata senior Robby Defren who actually threw down the fastest time of the Grade Level racers at that meet, as he ran 17:13 to win the JV race. Eden Prairie's Zach Spears will also be one to look out for today, as he ran 17:17 to place second behind Defren. According to the virtual meet projections by season average, Eden Prairie may have a chance to take this race as a team, although it may also be Edina and Wayzata's decisions to hold their top runners off the quick Chaska course which aid the Eagles' boost on paper. Either way, the point totals are close enough that the team title could go to any of the three top teams.

The Skinny: Like in the Senior/Junior race, the top sophomores today have all run on the same course on the same day. At Conference, Wayzata's Caden Karn came out on top, running his best time of 17:22. Not far behind, in the JV race, were his teammates Abdi Robleh and Jack Bartels. In all likelihood, it will be a race between these three for the individual title. However, although Eden Prairie's Isaac Hartman did not clock one of the faster times at Conference, his personal best comes from the same course at Gale Woods Farm-he ran a 16:40 all the way back in September, at the Bauman/Rovn Invite. If Hartman can find that form again, he will be a shoo-in to take the win and maybe even fight his way to a varsity spot in the postseason. In the team battle, Eden Prairie and Wayzata are close enough that it will be a fight to the finish for the dub, while a massive 123-point gulf separates the top two teams from projected third place Robbinsdale Armstrong.

The Skinny: No Willmar team has ever placed first or second in a race at Lefty Wright Grade Level Championships. However, that may change today, breaking the monopoly Lake Conference teams have held on the top two spots since the Chanhassen girls took second to Wayzata in 2010. By season best, the Willmar Freshman and Under squad is projected to be easily within striking distance of Wayzata. Though season average has them set significantly farther back from the Trojans, the Cardinals are in a good position over Edina. And if Matthew Harries, a freshman, ends up running on Wayzata's Section team, Willmar has a good chance to secure the victory. For certain, individually, Wayzata's Connor Van Holdt will be a runner to watch, as he laid down a blazing 17:08 at Conference. The Grade Levels course is consistently fast from year to year, so if Van Holdt is chasing sub-17, this will be the day to do it.

The Skinny: After dropping a 19:13 at the Milaca Mega Meet to lower her PR from 2017 Regionals, reigning Nordic ski State Champion Mara Mccollor has recorded the fastest time in this field by 42 seconds. However, at Conference it was Edina's Claire Wagner who had her best performance out of a season of breakout performances, throwing down a lifetime PR to break 20 minutes for the first time. Not far behind were her teammates Berit Schuveiller and Heidi Engman. If this trio can pack up and push each other, it's very possible that the Hornets could sweep the top three spots in the Senior/Junior race. Junior Heidi Engman was the champion in the girls Sophomore and Under race last year, and went on to run a 19:06 at Regionals, along with an 11:49 3200 in track. Not to be forgotten is the Trojans' Anna Bartels, who has dropped time in every race this season and who also ran her lifetime PR in her Conference meet. Though Edina is stronger through three runners, they fall off at four and five, which will give Wayzata the edge to take the team title.

Sophomore and Under Race

The Skinny: This race may be the most exciting of the day, with a potential to be a 5-way (or more) face-off for the individual win. At Lake Conference, the four top runners in this race came in within seven seconds of each other, with Wayzata sophomore Ingrid Halverson winning out over Edina sophomore Emma Hudson 19:37 to 19:38. Both runners have been having breakout seasons. Freshmen Ella Braufman and Abby Winter came in just behind their teammates at 19:40 and 19:44. Winter in particular will be a runner to watch, as she just threw down a 5:16 for 1600 in the Hornets' annual time trial, proving she has the finishing speed to take this race if it's within her grasp. Additionally, though Edina's Evie Hage had an off-race at Conference, her season record, including a 5th-place finish at the Jefferson Jaguar Challenge, where she came out on top of her teammate Hudson, proves she should not be counted out. As a team, the Hornets are the favorite, thanks to their strong top three and solid four and five in sophomores Jayne Parry and Megan Sieve.