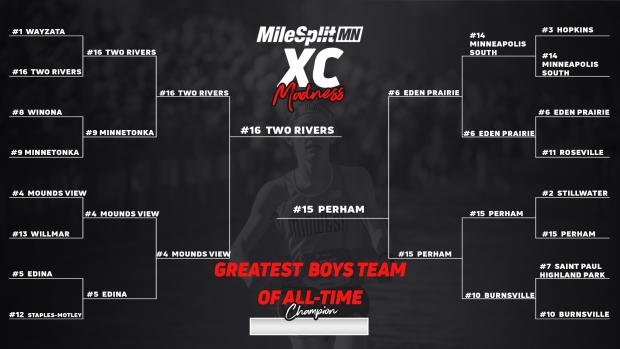 Three rounds of voting have come and gone, and with all the upsets imaginable, we have a #15 vs. #16 final between the Two Rivers and Perham boys. Ten of thousands of votes have gotten us here, and now it's your turn to crown the Greatest Minnesota Boys Cross Country school of All-Time.

Evaluating who the best Minnesota cross country team is of all time is not a simple question to ask. Do we go by who has the most state titles, individual champions, conference or section titles, or something else? Well, we at MileSplit Minnesota decided to let you choose by evaluating 16 schools in Minnesota by their top five fastest runners of all-time in our database.

The participating schools were chosen by looking up the top five 5K times in our database for all-performances all-time and then averaging out those top 5 runners for an average 5K time. For example, the Winona boy's all-time top five runners Garret Heath, Elliot Heath, Carter Briggs, Jon-Michel Brandt, and Hunter Baily average out to 15:29.34 5K average time.

Click on the links below to go to the final poll: