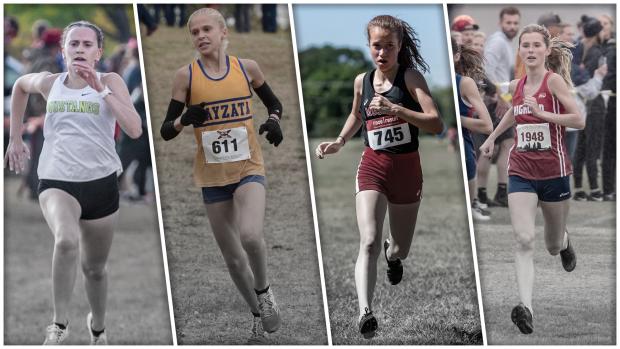 With their most recent rankings of the MileSplit 50, the National MileSplit team ranked the top teams for each national qualifying region. They ranked the top Heartland teams consisting of teams from Iowa, Minnesota, Nebraska, North Dakota, South Dakota, and Wisconsin.

Here they ranked the top girls team for the Heartland region which includes MileSplit 50 ranked teams in #13 Wayzata, and Honorable Mention teams in Minnetonka, Muskego, and Saint Paul Highland Park.

How we rank: We have compiled a list of over 100 teams across the U.S., from every national qualifying region, and quantified their performances via speed ratings and speed rating averages, evaluated wins versus losses, fastest team averages, and competitive races. Below are the top five girls teams from the Heartland region, based on our data: The #13 nationally ranked team in the MileSplit50 rankings, the Wayzata girls from Minnesota lead Minnesota with a 18:15.91 scorers average and are led by MileSplit50 National #1 runner and University of Colorado commit Abbey Nechanicky. The Wayzata girls are undefeated on the season with 3 victories over Minnetonka, one over Highland Park, and one over Colorado powerhouse Cherry Creek at Roy Griak.

The Wayzata girls are led by standout seniors Nechanicky, Grace Mignone, Teegan Anderson, and Grace Weber. This is largely the same team that finished as the Class AA state runner-up in Minnesota last year without Nechanicky and one that finished 5th at Heartland last fall. They will look to take another step forward this season with the same lineup and with Nechanicky healthy and back runner better than ever. Though they may have been a step behind Wayzata in Minnesota this season, the Minnetonka girls ran their best race of the season at the Lake Conference Championships where they finished 20 points behind Wayzata and ran to a 18:51 scoring average. The Minnetonka girls were bolstered by the return of Maya Mor who is running cross country races healthy for the first time since October 2020. Mor ran to a strong time of 18:19 at conference and finished as the #2 runner for Minnetonka.

Minnetonka will look to make some noise this fall after missing out on last year's Minnesota state championships after narrowly missing out after finishing 3rd in a loaded Section 2AAA. They will look to improve on their 8th-place team finish at Heartland. They are led by Mor and standout 8th-grader Evie Malec. They also return Avery Marasco-Johnson, Claire Cashman, and Ella Graham from last year's varsity squad. The Muskego girls are the defending 3rd-place finishers at the WIAA State Meet for division one but have been bolstered by big contributions from their #1 runner Noelle Junig and their #2 runner in Ella Anschutz. Junig returns to the cross country course for the first time since 2020 and ranks as the #6 runner in Wisconsin with a time of 17:57.66. Anschutz ranks as one of the top freshmen in Wisconsin in her first cross country season and ranks #6 in Wisconsin with a time of 18:37.70.

The Muskego girls have scarcely run this fall, but when they have they have won. They recently won the Classic 8 Conference title by 37 points over Waukesha West. After that performance, they rank as the top team in Wisconsin with a 19:03.04 scoring average. The Saint Paul Highland Parks girls have been the dominant team in Class AA as of late after being anchored by Molly Moening for years. Moening has graduated and Luna Scorzelli has stepped into her shoes and more after her recent performance of 17:25 at the St. Paul City Conference Championships. The Highland Park girls rank only behind Wayzata in scoring average this season with their average of 18:35.80. They have also come the closest to beating Wayzata with 33-41 team race at the Eden Praire Metro Invitational.

In their victories, this season, the Highland Park girls have won by an average of 46 points. They have only lost twice this season, once at Eden Prairie to Wayzata, and then at the Roy Griak where they finished 5th overall. With a near-perfect score at the St. Paul City Conference Championships, they ran a 18:38 scorers average. They won't get a chance at Wayzata or Minnetonka until Heartland, but with an ace runner in Luna Scorzelli and great depth in Delia Johnson, Ellie Moore, Hannah Koch, and more, they will look to be a contender. No one has been able to defeat or even come close to defeating the Dubuque Hempstead girls who have won every one of the eight meets they have entered this season. Their average margin of victory in their victories has been 38 points. At this week's Iowa State 4A Qualifier, they dominated to win by 27 points and had the top four finishers overall. They finished the race with a scorers average of 18:24. They lead Iowa this season with an overall scorers average of 18:21.09 compared to Pleasent Valley's 18:58.33.

The Hempstead girls are led by junior Julia Gehl who has won her past four races and recently set a personal best in the 5K with a time of 17:57. Overall, they have the #4 runner in Iowa this year in Gehl, the #7 in Keelee Leitzen, and the #12 in Brooke O'Brien. They haven't faced any of the major out-of-state competition in the Heartland, but with their domination, they should be confident heading into the major regional cross country meets.