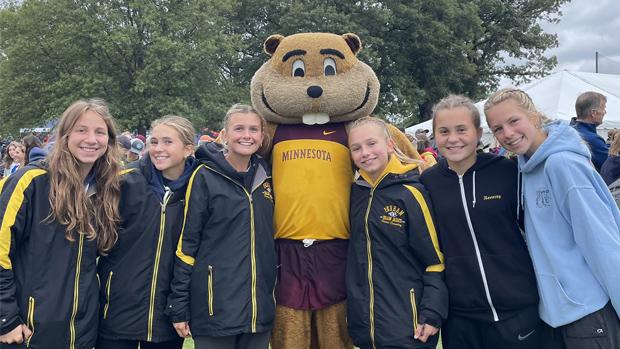 The 2022 Roy Griak Invitational was sure one to remember with close team races, blowout individual wins, and a few close calls for some meet records! It's always one of the most exciting races on the Minnesota cross country calendar, and once again it did not disappoint.

Here we recap the high school boy's and girl's gold and maroon races!

Robbinsdale Armstrongs Noah Breker continued his outstanding 2022 cross country season by leading a loaded field across the finish line for his 4th win of 2022 with a time of 15:31.1 which is the 2nd fastest in Roy Griak history.

Breker led a strong field that included Jackson Heidesch and Ford Washburn within 3 seconds of Breker overall, with Manny Putz and 2021 Griak Champion Sam Scott just behind them. It was a tight race with the lead group of boys throughout the race. At the mile mark, there was a large pack of 14 boys within 2 seconds of each other. At the 3000m mark, that group had dwindled to an 8 boys pack. Down the straight to the finish line, it had turned into a three-boy race between Breker, Heidesch, and Washburn, with Breker outrunning the competition.

Breker now owns the 2nd fastest time in Roy Griak history, only behind 2013 Griak Champion Obsa Ali. Ali ran a meet record of 15:30.80 that year, only three-tenths of a second faster than Breker this year. Breker is now the 4th straight Minnesota boy to win the boy's gold race, going back to 2018 (2020 Canceled).

In the boy's team race, it was the Dowling Catholic boys of Des Moines, Iowa who came out on top after a strong push in the last bit of the race to push past Lakeville North and Naperville. Naperville held a commanding 68-point lead at the mile marker and then a narrow 14-point lead at 3000m before finishing in 3rd place.

Overall, Minnesota dominated the team results with three of the top five teams coming from Minnesota: 2. Lakeville, 3. Wayzata, and 4. Rosemount.

It was the Abbey Nechanicky show in the girl's gold race here, with Nechanicky blowing away a field loaded with national talent en route to a 30-second victory with a time of 17:37.90. After the first mile it was Nechanicky all the way, opening up to a 12 second lead at 3000m and the 30-second victory.

Nechanicky is now undefeated on the season and with a major victory here looks to be a player for the big national meets at the end of the season. Only two girls have ever run faster than her at the Griak, Emily Covert in 2018 and Riley Stewart in 2019. Later on in their seasons, Covert and Stewart both finished top-20 at some of the big national XC meets.

Now if you thought the individual race was something special, you haven't seen the team race yet!

Going into the girl's gold team race, it was projected to be a big Cherry Creek win, but most knew that it should be a good team race between the Cherry Creek and Wayzata girls. The National MileSplit team being split down the middle on whether Wayzata or Cherry Creek would come out on top.

And then Wayzata and Cherry Creek had to finish just one point apart in the end!!

The Wayzata girls finished with 113 points to Cherry Creek's 114 points to win yet another Roy Griak title for the Minnesota powerhouse. It was a tight race between the two schools and defending champions Olathe West for the whole race. In the end, the team race most likely came down to Nechanicky beating out Price and Cohen to the finish line.

Minnesota came through with their third individual race winner in the boy's maroon race after Chaska's Nolan Sutter crossed the finish line. Sutter dominated the race the whole way through with a 4-second lead at the mile mark, a 12-second lead at 3000m, and a 17-second win over Perham's Bjorn Anderson in the end.

3/3 on the individual champions so far for Minnesota!!

In the team race, it was Lee's Summit West boys of Missouri that took home the team win with 121 points compared to the 128 points of Notre Dame Academy (WI) and Perham with 143 points. It was a narrow race between the three schools the whole way, with all of them trading positions throughout the race. In the girl's individual race, it was all Geneva Timmerman of Adel-Desoto-Minburn in Iowa. Timmerman led the whole way with commanding leads at the mile (17 seconds) and 3000m (35 seconds), before finishing with a time of 19:07.70 which was 27 seconds better than the runner-up.

Other girls traded off in second place with several different girls taking the lead behind Timmerman in the race. Annabelle Ellenbogen had a big second-place lead at the mile marker, Hannah Drietz was there at 3000m, and Meredith Richter finished in 2nd overall.

On the team side, it was a great battle between Perham and Brainerd. Brainerd came away with the win in the end with 115 points to Perham's 150. Brainerd put four of their scorers in the top twenty finishers, and with that impressive display of depth, it was too much for Perham to overcome.