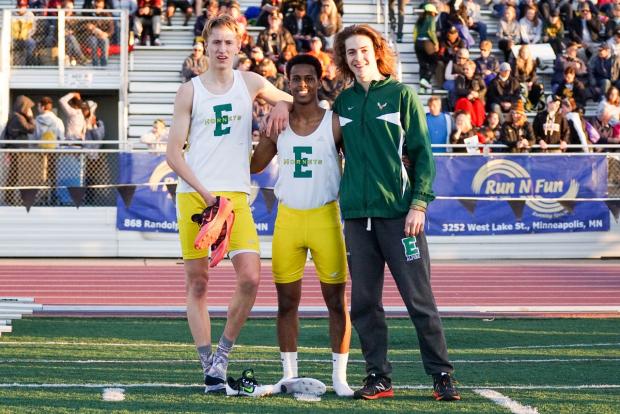 First of all, how did you first start doing track?

I started in freshman year. It was pretty random because I didn't even know anyone else doing track, but I thought it'd be fun. My freshman year season got cut short as I had a pretty bad back injury that prevented me from racing.

300 hurdles: 38.38 (Edina school record). It used to be 39.9 held my fellow hurdler Henry Adam's father. Abdi beat that record, then beat his own record later. Then at the State Championships, I beat his record.

Do you do, or have you done, any other sports?

I've played soccer my whole life, but this fall I quit the high school team to run cross country. I quit summer club as well to train more for track.

Did you join cross country to help you for track, or be with the same core group of friends, or...?

I joined cross country to train for track. The CC program at Edina is very talented so I wasn't even close to running varsity but getting to know an entirely new group of kids and how long distance runners trained was great, and increasing my endurance is another step that will take me closer to the championship podium.

Was is your favorite or most memorable race you have ever run? 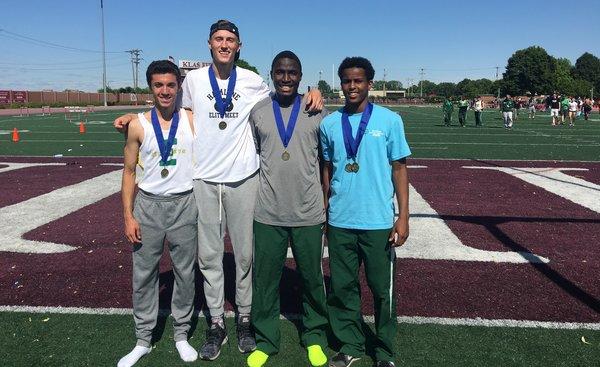 Who are some of your favorite athletes to compete against (other than your own talented teammates, of course)?

Joey Frasier has been with us our whole career. He's running just as fast 300 hurdle, 110HH, and 400s as us so we called him our arch enemy. I'm also excited to race Evan El-Halawani (300 hurdles champ) this season because we became friends over coinciding college visits. My favorite to race in practice is Theo Keller, a sophomore this year. Henry, Abdi, and I like to call him our prodigy. He's naturally athletic and learns fast.

Last year you and Abdihafid Sahal became the first guys since 1987 to finish in the top-five at State as teammates in one of the hurdle events. What is it like to have a teammate as good as him to train with?

It's an insane feeling to race with Abdi and Henry Adams. Knowing that we are one of the top hurdling squads to come through Minnesota is a great feeling. We are all crazy lucky to be able to train with each other and no doubt push each other harder than any other team. Also there's way more competition because we all wanna beat each other.

What are your main goals for this upcoming season?

My main goal is to get first in the 300 hurdles and run under 38 seconds. Next comes keeping Abdi Sahal from taking the school record from me, as well as leaving a time that will last forever. Getting better than 5th in state for the 4x400 would also be great. Running under 50 would help make that happen.

Do you have any college plans?

I committed to the University of Minnesota. I'm crazy excited to be running there. MN was my first choice in a school and I have been training super hard to succeed at the collegiate level. 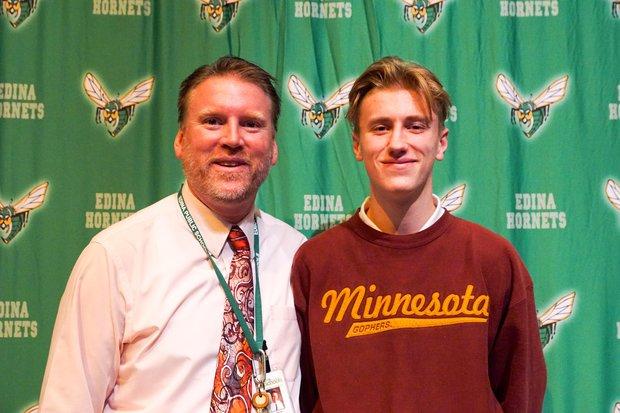 I am most excited for Athlete Village which is an entirely new building that's dedicated completely to the athletes at the U. Not to mention the brand new outdoor track that is being built on campus planned to be finished in 2018. To be honest I'm not familiar with the current athletes on the team but I'm sure I'll fit in and learn a lot from them.

Do you have any rituals or superstitions either on or off the track?

My old coach had me drain the lactic acid out of my legs after each race. So I'll sit on my back and put my legs up against a wall or pole. Also, I've worn the same pair of socks on each race day. They're Stance socks with wolves on them. Fierce.

When not clearing barriers or handing off batons, what might we find you doing?

I've been lifting weights almost every day I don't have something else that takes up my time. And I love hanging with my squad OG5.

OG5 is what our friend group calls ourselves. OG (original) 5 is a little misleading as we have added a 6th guy (Henry Adams) to the mix after we made up the name. The other 4 are Jake Epple, Max Thommes, Hayden Foley, and Jack Ebner. Shout out to OG5!

Tell me one bizarre fact about yourself

I'm addicted to chapstick and buying shoes online. Buying shoes has become a reward for me. If I achieve something I'll reward myself.

So we can judge how often you reward yourself by how big your shoe collection is, eh? Well how big is it?

Exactly! Currently I own 10 pairs of shoes and 2 pairs of spikes. My favorite ones currently are my all-white Nike Flyknit and my new NB Vazee Sigma spikes.