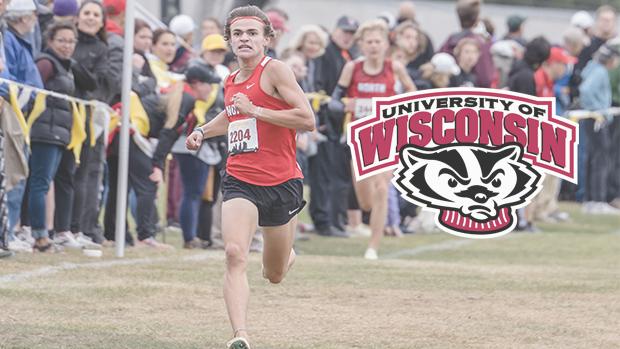 Lakeville North's Andrew Casey has had a busy year so far competing at the MSHSL State Track meet in three events, winning a state title in the 4x400m, competing at New Balance Nationals, leading the Lakeville North boys to an undefeated XC season so far, and smashing all his PRs in the process.

Now he can add his college commitment to his growing list of 2022 accomplishments.

Casey today announced that he is going to run cross country and track and field at the University of Wisconsin in Madison.

Today we talked with Casey about his college commitment, the recruiting process, and what the rest of his cross country season holds for him.

It feels great. Looking back at my middle school years or even earlier times in high school, I never truly thought I would have a chance to compete at the D1 level let alone in Madison, everything right now feels surreal to me.

How did you come to commit to Wisconsin?

Wisconsin had always been the college I wanted to go to, even when I was a really little kid. Lots of my family went there so I've always been a huge fan of them. When you add to the fact they have some very successful coaches, plus a super fun and talented team, it was a done deal for me.

Were there any other schools you considered?

Yes-Duke, Georgetown, Tulsa, and a handful of others were up there on my search. Getting to talk to their coaches and seeing some of their campuses opened my eyes up to a lot more than just Wisconsin.

The entire process was extremely fun, most of it started from coaches texting me through Instagram and from there setting up calls. Meeting so many collegiate athletes and hearing their stories was a blast. All of them which I now look up to. The visits were great times and getting to see different campuses across the country was something not a ton of people get to do, so I am very grateful.

What goals do you envision yourself having for your career as a Badger?

I'm not too sure yet to be honest. One goal for sure is to be a Big Ten champion at some point. The rest will write themselves as time goes on!

For those on the team currently or those you know will be joining you in your class, who are you most looking forward to training and competing with?

If I could say the whole roster I would, but Abdullahi Hassan and Adam Spencer for sure. They are both phenomenal more mid-distance runners that are young and there already, I'm sure them two specifically will be fun to work with. As for the people in my class joining me, I can't say yet since they are still in the process, but I'm excited!

What are your goals for the rest of the cross-country season this fall?

Some goals are to get my PR down at least one more time, and to place well at state.

Your Lakeville North boys are undefeated against Minnesota teams so far this season, do you feel like you're the best team in Minnesota this fall, and do you think you can take home the Class AAA state title?

Yes I do! All of our team has put in the work for it and I know we are all hungry for something like a state title. Although we want it, it's still pretty early in the season so we just need to keep putting in the work and not get caught up in rankings, meet predictions, etc.

Do you think you can compete for the Class AAA individual state title? Who do you think is your main competition there?

Saying I will win is a long shot in my opinion, especially with the amount of long-distance talent in our state. The guys like Noah Breker, Nick Gilles, Sam Scott, Aiden Jones, Nolan Sutter, and of course the list goes on and on, are so talented. That doesn't mean I don't think I can have a good race and be in the mix, but to win it all seems incredibly tough.

Looking past the Minnesota cross-country season, are you going to compete at any of the big national or regional meets?

Yes. I really hope to get out to at least NXR with my team and hopefully another, either as a team or individually.

You are one of the best runners in Lakeville North history, what kind of legacy and impact do you think you're leaving on the program?

I really hope I'm leaving behind some form of new culture, but who am I to say. First joining the track or cross teams I always looked up to the older guys or captains so I hope I can be someone that younger runners or athletes, in general, look up to. The underclassman or even middle schoolers on my team are the future and I hope they can take Lakeville North track or cross to another level with numbers, success, and culture.

Related: Casey and Stachewicz Set the Standard for Lakeville North

For sure my teammate Bryce Stachewicz. He's been with me since the very start, we've been trading off times and PRs since we were in 6th grade. There's no such thing as a better training partner either. In terms of runners from different schools, I've enjoyed competing against all of them, no matter the age, so no matter who's in my race it's always a fun time!

What has been your favorite cross country memory so far from high school?

Definitely making it to state back my freshman year, me and my teammate Brandon raced all the way to the line and both of us qualified individually. Another memory was definitely winning the 4x400 in 3:17 in track this past season, I know it's not cross country but that was too enjoyable to not mention!