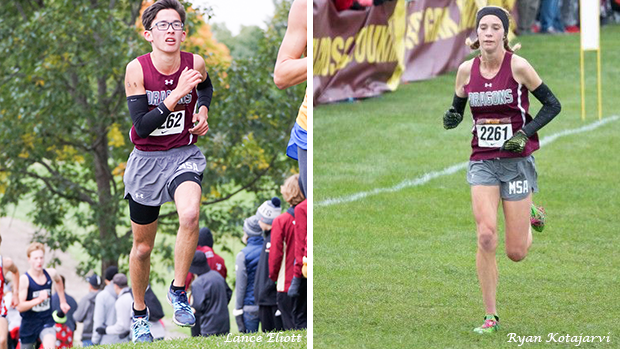 The Skinny: After a phenomenal opener at the St. Olaf Showcase, Harris Anderson shot up to 2nd in the Class A rankings, where he has stayed essentially all season. Anderson will be the runner to beat, and he owns the quickest season best in the field. However, that time came from St. Olaf, and Anderson has yet to eclipse it. That being said, his 16:23 time and 16th place finish at Griak last weekend was arguably his best overall performance of the year, so he looks like a good bet for the win. He'll first have to fend off 5th-ranked Cooper Lennox, 7th-ranked Luke Olson and 8th-ranked Cameron Stocke. Stocke just ran his lifetime PR on Tuesday at the Ely Invitational, where he picked up his first ever win in XC. Stocke also ran just 5 seconds slower than Anderson at the Milaca Mega Meet, but they were in different divisions, so expect Stocke to challenge for the victory. Lennox finished one spot behind Stocke at Milaca, showing he shouldn't be counted out either. And Olson was one spot behind Stocke at Ely and has been very consistent this year, so he will make a splash as well. Cole Nowacki, Tyson Mahar, and Dalton Piotter have all run 16:30 or better, and should each be a large part of the chase pack, while Max Gifford can certainly be counted on to compete with the top runners too. And with nine more buys sub 17:00, it should be very crowded up front.

On paper, East Grand Forks looks like the favorite. They've surprised this season and are currently ranked 11th in Class A. However, they lack depth, as their first four scorers are projected to finish in the top 16, while their fifth is projected to score 110 points. In such a large meet, that gap could prove costly. They will face fellow ranked squads North Shore (7th), Minnehaha Academy (9th), Mora (10th), and Plainview-Elgin-Millville (12th). North Shore and Mora went 3rd and 4th in the D3 boys race at Milaca, demonstrating they can compete with the best of Class A. Minnehaha Academy's most recent performance was a 4th place finish at the Jefferson Jaguar Challenge, where they finished just 24 points behind Nova Classical Academy and 27 out of the win. Plainview-Elgin-Millville most recently dominated the St. Charles Invitational, winning in just 39 points. With all five of these ranked teams within 70 points of each other (in such a large race), it seems that there is no clear frontrunner, and it should be a very exciting battle.

*note: since the writing of this preview, Harris Anderson has informed us that he is going to sit out the meet to rest his knees. Virtual meet projections have been updated to reflect this.

The Skinny: Lake City and Mora will most likely be the two big team players in this race as they are both ranked in the top ten for Class A. Lake City is ranked seventh and Mora is ranked tenth. They have only raced against each other once this season and that was at the Milaca Mega Meet. Lake City took second there ahead of Mora's fourth place finish by 22 points. They have two different types of teams being that Lake City has some solid front runners but Mora has a tighter pack. Blake was also in that race and finished in sixth, 17 points behind Mora, while Mesabi East took the team championship in the Division 4 race in Milaca. On a really good day, Blake or Mesabi East could close the gap which could help them sneak into the rankings (or in Mesabi East's case, back into the rankings. Along with Blake, East Grand Forks will be looking to climb the ranks as they have a solid team this year. They also have a few front runners and then a good pack of their fourth through sixth runners which helps them with their depth. They have shown great consistency this season at each of their races and have racked up a good amount of wins.

On the individual side, all eyes will definitely be on Tierney Wolfgram, the number one ranked runner in Class A and two-time defending Swain champion.  She is coming off of a runner-up finish at the Roy Griak Invitation where she ran a very impressive 17:50 5000m on that tough course. She has only lost to Emily Covert, this season and that is not likely to change at today's race. She is very fresh as she has only raced three times and all were high level races. Wolfgram won the Milaca Mega Meet by an impressive one minute and 38 seconds. It may be hard for that margin of victory to happen today being that the wet course conditions will probably lead to slower times. The runner up finisher in that field was Ava Hill who will be in the race today. Hill is ranked seventh in Class A and has also had an impressive season this year. She has four wins and two second place finishes. Last year she had the combination of an eighth place finish in cross country and a state championship in the 800m which proves to be a dangerous combination for her competitors as she combines the strength and speed. Katherine Geist is currently undefeated this season, has run a personal best, and is ranked tenth in Class A. She finished 51st at last year's state meet but went on to have a breakout track season, so her success this fall is not all that surprising. With Wolfgram in the field, her winning streak may come to an end but it will be interesting to see where she finishes against the other solid runners in the field such as Hill.  Two other runners in the field to note are Sydney Binsfield and Jacey Majerus. Majerus will be leading her team as they chase the team title so her placement is crucial in this race and continuing on in the season. She does not have as fast of times, especially on the track, as many other runners in this field but she holds her own in cross country. Binsfield finished just ahead of Majerus at the Milaca Mega Meet and has finished in the top three at all of her races this season.