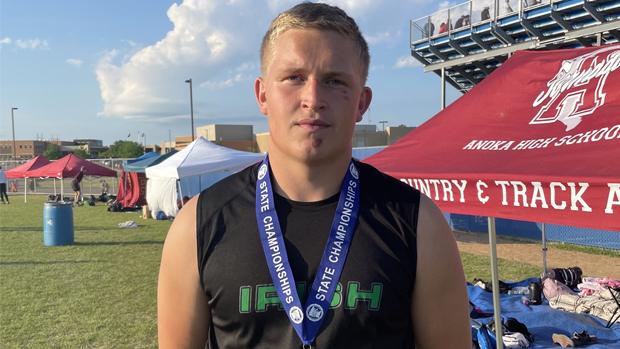 Rosemount's Hayden Bills was already a rising throwing star in Minnesota, but with one memorable throw at the state meet, he became a throwing legend.

At the 2022 MSHSL State Track and Field Championships, Bills won the Class AAA boys discus with a throw of 196' 2". Going into the meet Bills had a solid PR of 183' and going into his last throw at state was in first place with a throw of 182' 8" that was five feet better than 2nd place.

Then he uncorked his historic throw of 196' 2" that set all sorts of records. His throw of 196' 2" is the 4th best discus throw all-time by a MN boy, a new overall State Meet record, and a Rosemount school record.

While the 4th best discus throw in history is impressive, almost more impressive is the Rosemount school record that he broke given the throwing lineage in the Otterdahls that have all graduated from Rosemount. The Otterdahls consist of Maxwell Otterdahl, Trevor Otterdahl and Payton Otterdahl. Combined the three Otterdahls have 5 state titles in the discus and shot put.

Bills also had a strong shot put season that culminated in a 15th place finish at state. He also set a new personal best throw of 59' 2.25" that ranked as the 2nd best throw in Minnesota this season.

Bills had one more track and field season left next spring with the state discus record just over 5 feet away. Only time will tell if he can break the record and go down as one of the state's best all-time throwers.