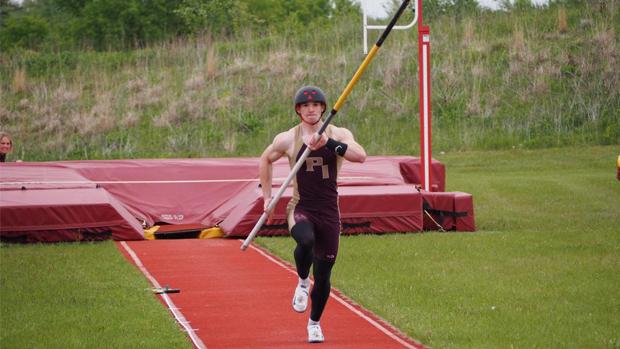 In 1982, Osseo's Matt Kolb set the new Minnesota high school state record with a jump of 15' 1.5". His record was broken 12 years later by Mahtomedi's Malmstrom. After that, it was broken a year later by Tim Koupal with a mark of 15" 7". Koupals mark stood for 13 years and has been eclipsed multiple times since. So why does this matter?

This matters because this season Calvin Ciganik's state record of 16' 1.75" (2018) was broken by Pine Island's Jarod White who vaulted 16' 2" at the Section 1A finals this year. Only a few Minnesota boys have vaulted over 16 feet so it was already improbable that his new state record would be broken anytime soon.

If it was already improbable, it may now seem impossible to break White's new mark.

At the Grand Haven Beach Vault in Michigan this past weekend, White vaulted 16' 9" to smash his previous personal best and set what is seemingly a record that will stand for a long time in Minnesota.

A culmination of his season shows that White has now broken the state record twice (once breaking his own record), setting the all-time state meet record with a vault of 16' 0", and going undefeated in the pole vault (in Minnesota) for the second year in a row.

This fall White will go to North Dakota State University where he will compete on the track and field team.