Ever since the 2020 MSHSL State Cross Country Championships were canceled due to the pandemic, we have waited for the day we returned to St. Olaf to crown some state champions. We got a glimpse of it earlier in the season at the St. Olaf High School Showcase, but being back here in November for the 2021 MSHSL State Championships is a whole different level.

For the first time, with the addition of Class AAA, we crowned 6 individual champions and 6 team champions. As simple as that sounds, there was a whole lot of drama, upsets, stunning results, and glory to get to the end of the state meet.

Read on below about the different races for each class! Nick Gilles put on his best performances during championship season for wins at the Lake Conference Championships, the Section 2AAA Championships, and now at the 2021 MSHSL State Championships! Gilles ran a time of 15:22.81 to beat out runner-up Noah Breker by just under 3 seconds. Gilles is the first individual boy's state champion in cross country from Minnetonka.

No one ever pulled away until the final stretch of the race, with large packs being evident at both the mile marker and two-mile marker. The final stretch is where champions were made, and where all the battles happened in the Class AAA boys race.

Breker nearly pulled off the two biggest upsets of the season in back-to-back weeks. Last week at the Section 6AAA Championships he beat Sam Scott by 14 seconds and this week he was just a few seconds away from beating Gilles and a state championship.

In his last high school cross country race, Daniel VanAcker finished 3rd overall with a time of 15:30.71. This is his highest finish at state, in his third appearance overall.

Gilles will be back next year to defend his title as a senior, with Breker, Ernest Mattson, Aidan Jones, Sam Scott, and company just behind him to challenge him for that elusive state title.

The Wayzata boys didn't place any runners in the top ten like they usually do, but they utilized their pack mentality and a close 1-5 scoring pack to take home their 12th state title, their first since 2017, and the first-ever Class AAA state title.

Led by Hamza Mohamed in 13th place (for scorers) and their final finisher finishing in 25th place (for scorers), only 17 seconds behind Mohamed, the Wayzata boys put up 96 points to beat Minneapolis Southwest by 22 points. If Sam Scott had run his best and/or Southwest's fifth runner had finished a bit better, this might've been a closer race. Ali Weimer continued her domination of Minnesota this year en route to winning her 2nd state title in 2021 after she won the 1600m Class AA race this past spring. Weimer ran a time of 17:42.81 to beat Sydney Drevlow who ran a time of 17:57.10. Weimer has now won 8 straight cross country races going back to last fall.

Drevlow and her teammate Daphne Grobstein finished in 2nd and 3rd overall as freshmen, to lead Hopkins to a 7th place finish as a team, and should be a duo to watch for the next three years. Grobstein ran an 18:23.94 to beat out the rest of the field by a couple of seconds for third place.

One of the most impressive performances of the day belonged to Eastview seventh-grader Kienna Loberg who ran an 18:47.05 to place 12th overall. This is the 10th fastest time at the state meet for a seventh-grade girl all-time. All those top-ten times have been run in the last 6 years.

On the team side, the favored Edina girls came out on top in a dominating performance to beat their main rival, Wayzata, by 25 points for the title. The Edina girls have now won 4 of the past 6 state championships.

The Edina girls were led by Maggie Wagner who finished 7th overall and then was rounded out by a group of girls who ran between 18:47 and 19:10. They had all their five runners in before any other team had four runners in.

The Edina girls led Wayzata by 3 points at the mile mark in the team race, and then slowly pulled away from everyone as the race went on.

The Prior Lake girls finished 3rd overall after upsetting Minnetonka last week to qualify for state. This is their highest finish at the state meet since 2009 when then finished 2nd overall. They might be a team to be reckoned with these next few years as they ran 4 eighth-graders and 3 freshmen on this team. 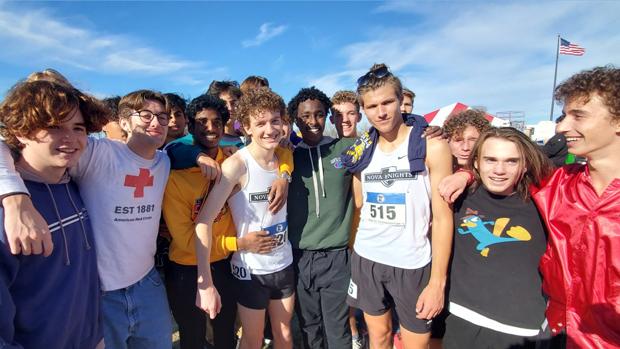 Shock and redemption were the themes in the Class A boys race. Perham's Jakob McCleary won the boy's individual title with a time of 16:09.64, but only because of some shocking developments in the final stretch of the race. Finn McCormick of Nova Classical Academy was the leader going onto the final stretch of the race but fell several times before finishing, therefore allowing McCleary to pass him for the individual title.

While McCormick didn't win the individual title, he was still able to get up and finish the race in 8th place overall to help lead his team to the Class A boys team title. He and teammate Henry Karelitz, who finished 2nd overall, were able to lead the Nova boys to a narrow victory over the Perham boys. If McCormick hadn't been able to finish 15th place or higher, the Perham boys would've won.

Great finish to a great season for our boys winning the @MSHSL State Championship! This trophy is for last year's team too. They won the year-end showcase championship but didn't get a trophy. Their leadership set the table for this year's team & we all share in the celebration. https://t.co/LvBmf0gnU9 pic.twitter.com/oF3rWmUB7T

This doesn't take anything away from Jakob McCleary who is the new Class A state champion in his fifth attempt at the state title as a senior. He and McCormick were just behind the lead pack of Noah Foster and Jeffrey Kayfes at the mile mark, and by the two-mile mark, the lead pack was McCleary, McCormick, Foster, and Karelitz.

Behind McCleary, it was a fierce race for second place with Henry Karelitz, Brandon Kampsen, and Noah Foster duking it out for the runner-up spot. Karelitz had the legs to edge to others out with a time of 16:25.02 with Kampsen coming in at 16:25.93 and Foster coming in at 16:26.03. While it was a close race at the mile and 2-mile mark in the girl's Class A race, Amanda Overgaauw demolished the competition in the last mile mark to win her first state title as a junior and to win her 11th straight race of the season.

Overgaauw follows her former Murray County Central teammate, Morgan Gehl, as official MSHSL state cross country champions. Gehl won the 2019 Class A girls race with a time of 17:53.50. In her 2019 cross country season, Gehl also had 11 straight wins like Overgaauw did this season.

Overgaauws time of 18:09.13 was 38 seconds faster than runner-up Tenley Nelson who ran an 18:47. They were the only two girls to run under 19:00 at this meet. Every runner who finished in the top ten in this race other than Tenley Nelson will return next fall to try and take away the title from Overgaauw.

On the team side, the Staples-Motley girls were narrowly able to edge out the Perham girls by 6 points to take home the state title. Kyanna Burton, Aften Robinson, and Audrey Brownell had top-fifteen finishes for Staples-Motley to make up for the relative lack of depth compared to Perham.

Luverne placed third overall not too far behind both teams with 117 points after Tenley Nelson and Jenna Debates finished 2nd and 3rd overall. With over a 1:30 between Debates and their 3rd runner, they had too much of a hurdle to beat out Perham or Staples-Motley. In a race, we've been looking forward to all season, Shef West and Alden Keller toed the line against each other for the state title, with Keller coming out on top with a time of 15:53.27 to beat West by 6 seconds. Keller was the favorite going into the race with the 5th fastest time in Minnesota and big wins against most of his main competition in Class AA.

Keller led the race at the mile mark and two-mile mark, though West was never more than a few seconds behind him the whole race. West and Keller were their own pack for most of the race after dropping Emmett Wolf before the two-mile mark. Wolf would end up finishing 4th overall behind third-place finisher Salvador Wirth.

It was a competitive battle behind Keller for the rest of the top five spots with only 8 seconds separating 2nd place through 5th place. Both Salvador Wirth and Sully Anez had PRs to place in the top five finishers in Class AA.

Of note, 7th place finisher Isaiah Anderson from Mankato was the last runner in his class to finish at the 2019 state meet, and Emmett Gerres who has been one of the class's strongest runners all season, finished 8th overall after having his appendix removed just over 2 weeks ago.

Going into the team race, our virtual meet results had the St. Paul Highland Park boys winning the team title handily. Well, that narrative was squashed right away as the Big Lake and Monticello boys got out to hot starts and never looked back.

The Big Lake boys led by four top-fifteen finishers in Owen Layton, Christian Noble, Jack Leuer, and Kade Layton won the meet by 10 points over section rival Monticello and 16 points over Highland Park. Their top four boys all ran around their season-best time, and fifth runner Tanon Jacobson rounded them off to win the title.

Monticello finished 2nd overall as a team and utilized their normal even scoring approach to almost beat their section rivals Big Lake. Their 57-second spread was about average for their season and Noah Mahoney nearly led them to the Class AA title, with just 10 points between the two teams.

The Highland Park boys had long been the top-ranked boy's team in Class AA but ran far slower than their season average to place third overall. Amazingly their split of 32 seconds was also triple their normal split for the season. Isabelle Schmitz and Olivia Goebel battled it out from the start in the girl's Class AA race and when the dust settled Isabelle Schmitz came away as the individual champion. Schmitz ran a 17:59.44 to beat out Goebel by 8 seconds for the title. Schmitz was only the third girl at state to run under 18:00.

This is the first state cross country title for the St. Paul Highland Park girls in their 4th attempt at the MSHSL State Meet. They had previously finished 6th overall in 2019 for their highest finish. With only one graduate this year in Molly Moening, might they start a small dynasty in Class AA?